A person’s posture at work—the mutual organization of the trunk, head and extremities—can be analysed and understood from several points of view. Postures aim at advancing the work; thus, they have a finality which influences their nature, their time relation and their cost (physiological or otherwise) to the person in question. There is a close interaction between the body’s physiological capacities and characteristics and the requirement of the work.

Musculoskeletal load is a necessary element in body functions and indispensable in well-being. From the standpoint of the design of the work, the question is to find the optimal balance between the necessary and the excessive.

Postures have interested researchers and practitioners for at least the following reasons:

Figure 1. Too high hand positions or forward bending are amont the most commom ways  of creating “static” load From a safety and health point of view, all the aspects of posture described above may be important. However, postures as a source of musculoskeletal illnesses such as low back diseases have attracted the most attention. Musculoskeletal problems related to repetitive work are also connected to postures.

Low back pain (LBP) is a generic term for various low back diseases. It has many causes and posture is one possible causal element. Epidemiological studies have shown that physically heavy work is conducive to LBP and that postures are one element in this process. There are several possible mechanisms which explain why certain postures may cause LBP. Forward bending postures increase the load on the spine and ligaments, which are especially vulnerable to loads in a twisted posture. External loads, especially dynamic ones, such as those imposed by jerks and slipping, may increase the loads on the back by a large factor.

Postures can be recorded and measured objectively by the use of visual observation or more or less sophisticated measuring techniques. They can also be recorded by using self-rating schemes. Most methods consider posture as one of the elements in a larger context, for example, as part of the job content—as do the AET and Renault’s Les profils des postes (Landau and Rohmert 1981; RNUR 1976)—or as a starting point for biomechanical calculations that also take into account other components.

In spite of the advancements in measuring technology, visual observation remains, under field conditions, the only practicable means of systematically recording postures. However, the precision of such measurements remains low. In spite of this, postural observations can be a rich source of information on work in general.

Video is usually an integral part of the recording and analysis process. The US National Institute for Occupational Safety and Health (NIOSH) has presented guidelines for using video methods in hazard analysis (NIOSH 1990).

Biomechanical and anthropometrical computer programs offer specialized tools for analysing some postural elements in the work activity and in the laboratory (e.g., Chaffin 1969).

Working postures serve a goal, a finality outside themselves. That is why they are related to external working conditions. Postural analysis that does not take into account the work environment and the task itself is of limited interest to ergonomists.

The dimensional characteristics of the workplace largely define the postures (as in the case of a sitting task), even for dynamic tasks (for example, the handling of material in a confined space). The loads to be handled force the body into a certain posture, as does the weight and nature of the working tool. Some tasks require that body weight be used to support a tool or to apply force on the object of the work, as shown, for example in figure 2. 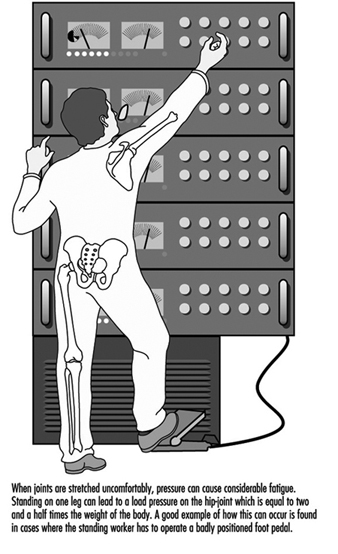 Individual differences, age and sex influence postures. In fact, it has been found that a “typical” or “best” posture, for example in manual handling, is largely fiction. For each individual and each working situation, there are a number of alternative “best” postures from the standpoint of different criteria.

Belts, lumbar supports and orthotics have been recommended for tasks with a risk of low back pain or upper-limb musculoskeletal injuries. It has been assumed that these devices give support to muscles, for example, by controlling intra-abdominal pressure or hand movements. They are also expected to limit the range of movement of the elbow, wrist or fingers. There is no evidence that modifying postural elements with these devices would help to avoid musculoskeletal problems.

Postural supports in the workplace and on machinery, such as handles, supporting pads for kneeling, and seating aids, may be useful in alleviating postural loads and pain.

Postures or postural elements have not been subject to regulatory activities per se. However, several documents either contain statements which have a bearing on postures or include the issue of postures as an integral element of a regulation. A complete picture of the existing regulatory material is not available. The following references are presented as examples.

Published in Physical and Physiological Aspects
Tagged under
Read more...