Mental strain is a normal consequence of the coping process with mental workload (MWL). Long-term load or a high intensity of job demands can result in short-term consequences of overload (fatigue) and underload (monotony, satiation) and in long-term consequences (e.g., stress symptoms and work-related diseases). The maintenance of the stable regulation of actions while under strain can be realized through changes in one’s action style (by variation of strategies of information-seeking and decision-making), in the lowering of the level of need for achievement (by redefinition of tasks and reduction of quality standards) and by means of a compensatory increase of psychophysiological effort and afterwards a decrease of effort during work time.

This understanding of the process of mental strain can be conceptualized as a transactional process of action regulation during the imposition of loading factors which include not only the negative components of the strain process but also the positive aspects of learning such as accretion, tuning and restructuring and motivation (see figure 2).

Figure 1. Components of the process of strain and its consequences 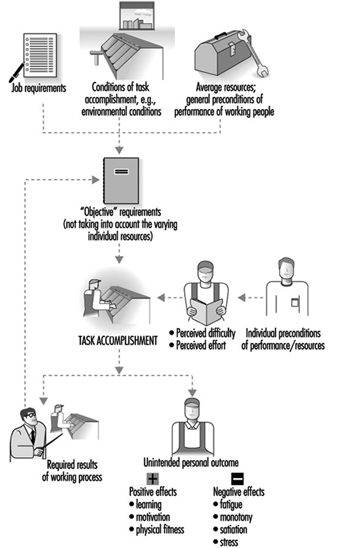 Mental fatigue can be defined as a process of time-reversible decrement of behavioural stability in performance, mood and activity after prolonged working time. This state is temporarily reversible by changing the work demands, the environmental influences or stimulation and is completely reversible by means of sleep.

Mental fatigue is a consequence of performing tasks with a high level of difficulty that involve predominantly information processing and/or are of protracted duration. In contrast with monotony, the recovery of the decrements is time-consuming and does not occur suddenly after changing task conditions. Symptoms of fatigue are identified on several levels of behavioural regulation: dis-regulation in the biological homeostasis between environment and organism, dis-regulation in the cognitive processes of goal-directed actions and loss of stability in goal-oriented motivation and achievement level.

Symptoms of mental fatigue can be identified in all subsystems of the human information processing system:

The well-described phenomenology of mental fatigue (Schmidtke 1965), many valid methods of assessment and the great amount of experimental and field results offer the possibility of an ordinal scaling of degrees of mental fatigue (Hacker and Richter 1994). The scaling is based on the individual’s capacity to cope with behavioural decrements:

Level 1: Optimal and efficient performance: no symptoms of decrement in performance, mood and activation level.

Level 4: Reduced efficiency additional to that described in level 3: decrease of performance criteria.

Level 5: Yet further functional disturbances: disturbances in social relationships and cooperation at workplace; symptoms of clinical fatigue like loss of sleep quality and vital exhaustion.

The design of task structures, environment, rest periods during working time and sufficient sleep are the ways to reduce symptoms of mental fatigue in order that no clinical consequences will occur:

1. Changes in the structure of tasks. Designing of preconditions for adequate learning and task structuring is not only a means of furthering the development of efficient job structures, but is also essential for the prevention of a misfit in terms of mental overload or underload:

2. Introduction of systems of short-term breaks during work. The positive effects of such breaks depend on the observance of some preconditions. More short breaks are more efficient than fewer long breaks; effects depend on a fixed and therefore anticipatable time schedule; and the content of the breaks should have a compensatory function to the physical and mental job demands.

3. Sufficient relaxation and sleep. Special employee-assistant programmes and stress-management techniques may support the ability of relaxation and the prevention of the development of chronicle fatigue (Sethi, Caro and Schuler 1987).