This article is adapted from the 3rd edition of the Encyclopaedia of Occupational Health and Safety.

The two concepts of fatigue and rest are familiar to all from personal experience. The word “fatigue” is used to denote very different conditions, all of which cause a reduction in work capacity and resistance. The very varied use of the concept of fatigue has resulted in an almost chaotic confusion and some clarification of current ideas is necessary. For a long time, physiology has distinguished between muscle fatigue and general fatigue. The former is an acute painful phenomenon localized in the muscles: general fatigue is characterized by a sense of diminishing willingness to work. This article is concerned only with general fatigue, which may also be called “psychic fatigue” or “nervous fatigue” and the rest that it necessitates.

General fatigue may be due to quite different causes, the most important of which are shown in figure 1. The effect is as if, during the course of the day, all the various stresses experienced accumulate within the organism, gradually producing a feeling of increasing fatigue. This feeling prompts the decision to stop work; its effect is that of a physiological prelude to sleep.

Figure 1. Diagrammatic presentation of the cumulative effect of the everyday causes of fatigue 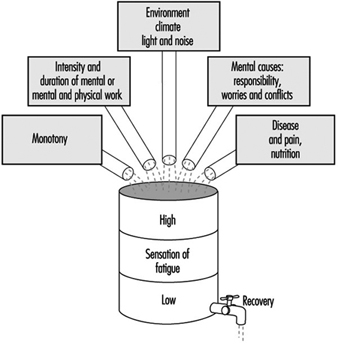 Fatigue is a salutary sensation if one can lie down and rest. However, if one disregards this feeling and forces oneself to continue working, the feeling of fatigue increases until it becomes distressing and finally overwhelming. This daily experience demonstrates clearly the biological significance of fatigue which plays a part in sustaining life, similar to that played by other sensations such as, for example, thirst, hunger, fear, etc.

Rest is represented in figure 1 as the emptying of a barrel. The phenomenon of rest can take place normally if the organism remains undisturbed or if at least one essential part of the body is not subjected to stress. This explains the decisive part played on working days by all work breaks, from the short pause during work to the nightly sleep. The simile of the barrel illustrates how necessary it is for normal living to reach a certain equilibrium between the total load borne by the organism and the sum of the possibilities for rest.

The progress of neurophysiology during the last few decades has greatly contributed to a better understanding of the phenomena triggered off by fatigue in the central nervous system.

The physiologist Hess was the first to observe that electrical stimulation of certain of the diencephalic structures, and more especially of certain of the structures of the medial nucleus of the thalamus, gradually produced an inhibiting effect which showed itself in a deterioration in the capacity for reaction and in a tendency to sleep. If the stimulation was continued for a certain time, general relaxation was followed by sleepiness and finally by sleep. It was later proved that starting from these structures, an active inhibition may extend to the cerebral cortex where all conscious phenomena are centered. This is reflected not only in behaviour, but also in the electrical activity of the cerebral cortex. Other experiments have also succeeded in initiating inhibitions from other subcortical regions.

The conclusion which can be drawn from all these studies is that there are structures located in the diencephalon and mesencephalon which represent an effective inhibiting system and which trigger off fatigue with all its accompanying phenomena.

Numerous experiments performed on animals and humans have shown that the general disposition of them both to reaction depends not only on this system of inhibition but essentially also on a system functioning in an antagonistic manner, known as the reticular ascending system of activation. We know from experiments that the reticular formation contains structures that control the degree of wakefulness, and consequently the general dispositions to a reaction. Nervous links exist between these structures and the cerebral cortex where the activating influences are exerted on the consciousness. Moreover, the activating system receives stimulation from the sensory organs. Other nervous connections transmit impulses from the cerebral cortex—the area of perception and thought—to the activation system. On the basis of these neurophysiological concepts, it can be established that external stimuli, as well as influences originating in the areas of consciousness, may, in passing through the activating system, stimulate a disposition to a reaction.

In addition, many other investigations make it possible to conclude that stimulation of the activating system frequently spreads also from the vegetative centers, and cause the organism to orient towards the expenditure of energy, towards work, struggle, flight, etc. (ergotropic conversion of the internal organs). Conversely, it appears that stimulation of the inhibiting system within the sphere of the vegetative nervous system causes the organism to tend towards rest, reconstitution of its reserves of energy, phenomena of assimilation (trophotropic conversion).

By synthesis of all these neurophysiological findings, the following conception of fatigue can be established: the state and feeling of fatigue are conditioned by the functional reaction of the consciousness in the cerebral cortex, which is, in turn, governed by two mutually antagonistic systems—the inhibiting system and the activating system. Thus, the disposition of humans to work depends at each moment on the degree of activation of the two systems: if the inhibiting system is dominant, the organism will be in a state of fatigue; when the activating system is dominant, it will exhibit an increased disposition to work.

This psychophysiological conception of fatigue makes it possible to understand certain of its symptoms which are sometimes difficult to explain. Thus, for example, a feeling of fatigue may disappear suddenly when some unexpected outside event occurs or when emotional tension develops. It is clear in both these cases that the activating system has been stimulated. Conversely, if the surroundings are monotonous or work seems boring, the functioning of the activating system is diminished and the inhibiting system becomes dominant. This explains why fatigue appears in a monotonous situation without the organism being subjected to any workload.

Figure 2 depicts diagrammatically the notion of the mutually antagonistic systems of inhibition and activation.

Figure 2. Diagrammatic presentation of the control of disposition to work by means of inhibiting and activating systems It is a matter of common experience that pronounced fatigue occurring day after day will gradually produce a state of chronic fatigue. The feeling of fatigue is then intensified and comes on not only in the evening after work but already during the day, sometimes even before the start of work. A feeling of malaise, frequently of an emotive nature, accompanies this state. The following symptoms are often observed in persons suffering from fatigue: heightened psychic emotivity (antisocial behaviour, incompatibility), tendency to depression (unmotivated anxiety), and lack of energy with loss of initiative. These psychic effects are often accompanied by an unspecific malaise and manifest themselves by psychosomatic symptoms: headaches, vertigo, cardiac and respiratory functional disturbances, loss of appetite, digestive disorders, insomnia, etc.

In view of the tendency towards morbid symptoms that accompany chronic fatigue, it may justly be called clinical fatigue. There is a tendency towards increased absenteeism, and particularly to more absences for short periods. This would appear to be caused both by the need for rest and by increased morbidity. The state of chronic fatigue occurs particularly among persons exposed to psychic conflicts or difficulties. It is sometimes very difficult to distinguish the external and internal causes. In fact, it is almost impossible to distinguish cause and effect in clinical fatigue: a negative attitude towards work, superiors or workplace may just as well be the cause of clinical fatigue as the result.

Research has shown that the switchboard operators and supervisory personnel employed in telecommunications services exhibited a significant increase in physiological symptoms of fatigue after their work (visual reaction time, flicker fusion frequency, dexterity tests). Medical investigations revealed that in these two groups of workers there was a significant increase in neurotic conditions, irritability, difficulty in sleeping and in the chronic feeling of lassitude, by comparison with a similar group of women employed in the technical branches of the postal, telephone and telegraphic services. The accumulation of symptoms was not always due to a negative attitude on the part of the women affected their job or their working conditions.

There is no panacea for fatigue but much can be done to alleviate the problem by attention to general working conditions and the physical environment at the workplace. For example much can be achieved by the correct arrangement of hours of work, provision of adequate rest periods and suitable canteens and restrooms; adequate paid holidays should also be given to workers. The ergonomic study of the workplace can also help in the reduction of fatigue by ensuring that seats, tables, and workbenches are of suitable dimensions and that the workflow is correctly organized. In addition, noise control, air-conditioning, heating, ventilation, and lighting may all have a beneficial effect on delaying the onset of fatigue in workers.

Monotony and tension may also be alleviated by controlled use of colour and decoration in the surroundings, intervals of music and sometimes breaks for physical exercises for sedentary workers. Training of workers and in particular of supervisory and management staff also play an important part.