Accidents are defined as unplanned occurrences which result in injuries, fatalities, loss of production or damage to property and assets. Preventing accidents is extremely difficult in the absence of an understanding of the causes of accidents. Many attempts have been made to develop a prediction theory of accident causation, but so far none has been universally accepted. Researchers from different fields of science and engineering have been trying to develop a theory of accident causation which will help to identify, isolate and ultimately remove the factors that contribute to or cause accidents. In this article, a brief outline of various accident causation theories is presented, followed by a structure of accidents.

According to W.H. Heinrich (1931), who developed the so-called domino theory, 88% of all accidents are caused by unsafe acts of people, 10% by unsafe actions and 2% by “acts of God”. He proposed a “five-factor accident sequence” in which each factor would actuate the next step in the manner of toppling dominoes lined up in a row. The sequence of accident factors is as follows:

In the same way that the removal of a single domino in the row would interrupt the sequence of toppling, Heinrich suggested that removal of one of the factors would prevent the accident and resultant injury; with the key domino to be removed from the sequence being number 3. Although Heinrich provided no data for his theory, it nonetheless represents a useful point to start discussion and a foundation for future research.

Multiple causation theory is an outgrowth of the domino theory, but it postulates that for a single accident there may be many contributory factors, causes and sub-causes, and that certain combinations of these give rise to accidents. According to this theory, the contributory factors can be grouped into the following two categories:

Behavioural. This category includes factors pertaining to the worker, such as improper attitude, lack of knowledge, lack of skills and inadequate physical and mental condition.

Environmental. This category includes improper guarding of other hazardous work elements and degradation of equipment through use and unsafe procedures.

The major contribution of this theory is to bring out the fact that rarely, if ever, is an accident the result of a single cause or act.

According to the pure chance theory, every one of any given set of workers has an equal chance of being involved in an accident. It further implies that there is no single discernible pattern of events that leads to an accident. In this theory, all accidents are treated as corresponding to Heinrich’s acts of God, and it is held that there exist no interventions to prevent them.

Biased liability theory is based on the view that once a worker is involved in an accident, the chances of the same worker becoming involved in future accidents are either increased or decreased as compared to the rest of workers. This theory contributes very little, if anything at all, towards developing preventive actions for avoiding accidents.

Accident proneness theory maintains that within a given set of workers, there exists a subset of workers who are more liable to be involved in accidents. Researchers have not been able to prove this theory conclusively because most of the research work has been poorly conducted and most of the findings are contradictory and inconclusive. This theory is not generally accepted. It is felt that if indeed this theory is supported by any empirical evidence at all, it probably accounts for only a very low proportion of accidents without any statistical significance.

Those who accept the energy transfer theory put forward the claim that a worker incurs injury or equipment suffers damage through a change of energy, and that for every change of energy there is a source, a path and a receiver. This theory is useful for determining injury causation and evaluating energy hazards and control methodology. Strategies can be developed which are either preventive, limiting or ameliorating with respect to the energy transfer.

Control of energy transfer at the source can be achieved by the following means:

The path of energy transfer can be modified by:

The receiver of energy transfer can be assisted by adopting the following measures:

The “symptoms versus causes” theory

The “symptoms versus causes” theory is not so much a theory as an admonition to be heeded if accident causation is to be understood. Usually, when investigating accidents, we tend to fasten upon the obvious causes of the accident to the neglect of the root causes. Unsafe acts and unsafe conditions are the symptoms—the proximate causes—and not the root causes of the accident.

The belief that accidents are caused and can be prevented makes it imperative for us to study those factors which are likely to favour the occurrence of accidents. By studying such factors, the root causes of accidents can be isolated and necessary steps can be taken to prevent the recurrence of the accidents. These root causes of accidents can be grouped as “immediate” and “contributing”. The immediate causes are unsafe acts of the worker and unsafe working conditions. The contributing causes could be management-related factors, the environment and the physical and mental condition of the worker. A combination of causes must converge in order to result in an accident.

Figure 1 shows the structure of accidents, including the details of immediate causes, contributing causes, types of accidents and results of accidents. This accounting is not exhaustive by any means. However, an understanding of the “cause and effect” relation of the accident-causing factors is required before continuous improvement of safety processes can be undertaken. 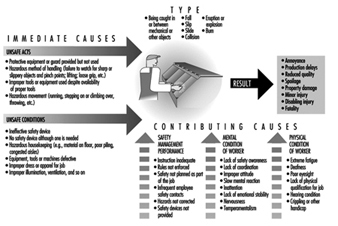 Accident causation is very complex and must be understood adequately in order to improve accident prevention. Since safety lacks a theoretical base, it cannot be regarded as being a science yet. This fact should not discourage us, as most of the scientific disciplines—mathematics, statistics and so on—passed through a similarly tentative phase at one time or the other. Accident causation study holds great promise for those who are interested in developing the pertinent theory. At present, theories of accident causation are conceptual in nature and, as such, are of limited use in preventing and controlling accidents. With such a diversity of theories, it will not be difficult to understand that there does not exist one single theory that is considered right or correct and is universally accepted. These theories are nonetheless necessary, but not sufficient, for developing a frame of reference for understanding accident occurrences.