Control devices and devices used for isolating and switching must always be discussed in relation to technical systems, a term used in this article to include machines, installations and equipment. Every technical system fulfils a specific and assigned practical task. Appropriate safety control and switching devices are required if this practical task is to be workable or even possible under safe conditions. Such devices are used in order to initiate control, interrupt or retard the current and/or the impulses of electric, hydraulic, pneumatic and also potential energies. 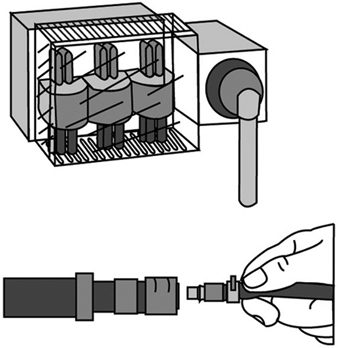 A master-switch device disconnects the technical system from the energy supply. Unlike the isolating device, it can be operated without danger even by “non-energy specialists”. The master- switch device is used to disconnect technical systems not in use at a given moment should, say, their operation be obstructed by unauthorized third persons. It is also used to effect a disconnection for such purposes as maintenance, repair of malfunctions, cleaning, resetting and refitting, provided that such work can be done without energy in the system. Naturally, when a master-switch device also possesses the characteristics of an isolating device, it can also take on and/or share its function. (See figure 2.) 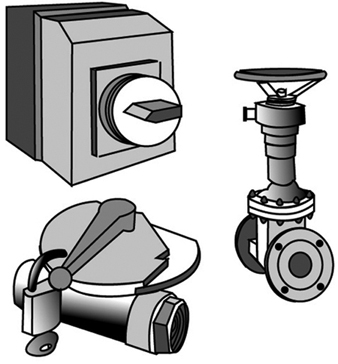 A safety-disconnection device does not disconnect the entire technical system from the energy source; rather, it removes energy from the parts of the system critical to a particular operational subsystem. Interventions of short duration can be designated for operational subsystems—for instance, for the set-up or resetting/refitting of the system, for the repair of malfunctions, for regular cleaning, and for essential and designated movements and function sequences required during the course of set-up, resetting/refitting or test runs. Complex production equipment and plants cannot simply be shut off with a master-switch device in these cases, as the entire technical system could not start up again where it left off after a malfunction has been repaired. Furthermore, the master-switch device is rarely located, in the more extensive technical systems, at the place where the intervention must be made. Thus the safety disconnection device is obliged to fulfil a number of requirements, such as the following:

Where the master-switch device used in a given technical system is able to fulfil all the requirements of a safety-disconnection device, it can also take on this function. But that will of course be a reliable expedient only in very simple technical systems. (See figure 3.)

Figure 3. Illustration of elementary principles of a safety disconnection device Control gears permit movements and functional sequences required for operational subsystems of the technical system to be implemented and controlled safely. Control gears for operational subsystems may be required for set-up (when test runs are to be executed); for regulation (when malfunctions in the operation of the system are to be repaired or when blockages must be cleared); or training purposes (demonstrating operations). In such cases, the normal operation of the system cannot simply be restarted, as the intervening person would be endangered by movements and processes triggered by control signals either erroneously entered or erroneously generated. A control gear for operational subsystems must conform to the following requirements:

Figure 4. Actuating devices in the control gears for movable and stationary operational subsystems 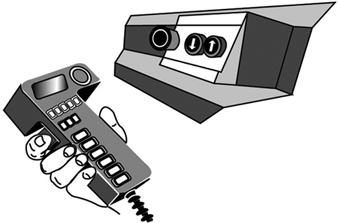 Emergency switches are necessary where the normal operation of technical systems could result in hazards which neither appropriate system design nor the taking of appropriate safety precautions are able to prevent. In operational subsystems, the emergency switch is frequently part of the operational subsystem control gear. When operated in case of danger, the emergency switch implements processes which return the technical system to a safe operating state as quickly as possible. With regard to safety priorities, the protection of persons is of primary concern; prevention of damage to material is secondary, unless the latter is liable to endanger persons as well. The emergency switch must fulfil the following requirements:

Figure 5. Illustration of the principles of control panels in emergency switches 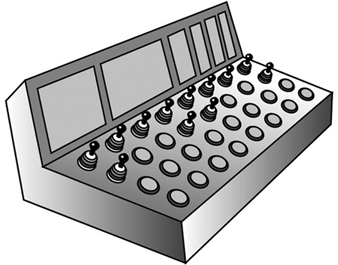 Monitoring switches prevent the starting of the technical system as long as the monitored safety conditions are not fulfilled, and they interrupt operation as soon as a safety condition is no longer being fulfilled. They are used, for example, to monitor doors in protective compartments, to check for the correct position of safety guards or to assure that speed or path limits are not exceeded. Monitoring switches must accordingly fulfil the following safety and reliability requirements:

Figure 7. Diagram of a switch with a positive mechanical operation and positive disconnection 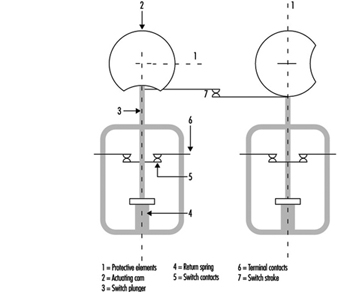 Several of the safety switching devices described above do not execute the safety function directly, but rather by emitting a signal which is then transmitted and processed by a safety control circuit and finally reaches those parts of the technical system which exercise the actual safety function. The safety-disconnection device, for example, frequently causes the disconnection of energy at critical points indirectly, whereas a main switch usually directly disconnects the supply of current to the technical system.

Because safety control circuits must transmit safety signals reliably, the following principles must therefore be taken into consideration:

The components used in safety-control circuits must execute the safety function in an especially reliable way. The functions of components which do not meet this requirement are to be implemented by arranging for as diversified a redundancy as possible and are to be kept under surveillance.