From this definition, it may be surmised that falls are unavoidable because gravity is always present. Falls are accidents, somehow predictable, occurring in all industrial sectors and occupations and having a high severity. Strategies to reduce the number of falls, or at least reduce the severity of the injuries if falls occur, are discussed in this article.

The Height of the Fall

The severity of injuries caused by falls is intrinsically related to the height of fall. But this is only partly true: the free-fall energy is the product of the falling mass times the height of the fall, and the severity of the injuries is directly proportional to the energy transferred during the impact. Statistics of fall accidents confirm this strong relationship, but show also that falls from a height of less than 3 m can be fatal. A detailed study of fatal falls in construction shows that 10% of the fatalities caused by falls occurred from a height less than 3 m (see figure 1). Two questions are to be discussed: the 3-m legal limit, and where and how a given fall was arrested.

Figure 1. Fatalities caused by falls and the height of fall in the US construction industry, 1985-1993

In many countries, regulations make fall protection mandatory when the worker is exposed to a fall of more than 3 m. The simplistic interpretation is that falls of less than 3 m are not dangerous. The 3-m limit is in fact the result of a social, political and practical consensus which says it is not mandatory to be protected against falls while working at the height of a single floor. Even if the 3-m legal limit for mandatory fall protection exists, fall protection should always be considered. The height of fall is not the sole factor explaining the severity of fall accidents and the fatalities due to falls; where and how the person falling came to rest must also be considered. This leads to analysis of the industrial sectors with higher incidence of falls from elevations.

Having taken into consideration the height of fall, the next important issue is how the fall is arrested. Falling into hot liquids, electrified rails or into a rock crusher could be fatal even if the height of fall is less than 3 m.

So far it has been shown that falls occur in all economic sectors, even if the height is less than 3 m. But why do humans fall? There are many human factors which can be involved in falling. A broad grouping of factors is both conceptually simple and useful in practice:

Opportunities to fall are determined by environmental factors and result in the most common type of fall, namely the tripping or slipping that result in falls from grade level. Other falling opportunities are related to activities above grade.

Liabilities to fall are one or more of the many acute and chronic diseases. The specific diseases associated with falling usually affect the nervous system, the circulatory system, the musculoskeletal system or a combination of these systems.

Tendencies to fall arise from the universal, intrinsic deteriorative changes that characterize normal ageing or senescence. In falling, the ability to maintain upright posture or postural stability is the function that fails as a result of combined tendencies, liabilities and opportunities.

Falls are caused by the failure of postural stability to maintain a person in an upright position. Postural stability is a system consisting of many rapid adjustments to external, perturbing forces, especially gravity. These adjustments are largely reflex actions, subserved by a large number of reflex arcs, each with its sensory input, internal integrative connections, and motor output. Sensory inputs are: vision, the inner ear mechanisms that detect position in space, the somatosensory apparatus that detects pressure stimuli on the skin, and the position of the weight-bearing joints. It appears that visual perception plays a particularly important role. Very little is known about the normal, integrative structures and functions of the spinal cord or the brain. The motor output component of the reflex arc is muscular reaction.

The most important sensory input is vision. Two visual functions are related to postural stability and control of gait:

Two other visual functions are important:

The three sensory inputs are interactive and interrelated. The absence of one input—and/or the existence of false inputs—results in postural instability and even in falls. What could cause instability?

Postural stability and gait control are very complex reflexes of the human being. Any perturbations of the inputs may cause falls. All perturbations described in this section are common in the workplace. Therefore, falling is somehow natural and prevention must therefore prevail.

As previously noted, the risks of falls are identifiable. Therefore, falls are preventable. Figure 2 shows a very common situation where a gauge must be read. The first illustration shows a traditional situation: a manometer is installed at the top of a tank without means of access In the second, the worker improvises a means of access by climbing on several boxes: a hazardous situation. In the third, the worker uses a ladder; this is an improvement. However, the ladder is not permanently fixed to the tank; it is therefore probable that the ladder may be in use elsewhere in the plant when a reading is required. A situation such as this is possible, with fall arrest equipment added to the ladder or the tank and with the worker wearing a full body harness and using a lanyard attached to an anchor. The fall-from-elevation hazard still exists.

Figure 2. Installations for reading a gauge

In the fourth illustration, an improved means of access is provided using a stairway, a platform and guardrails; the benefits are a reduction in the risk of falling and an increase in the ease of reading (comfort), thus reducing the duration of each reading and providing a stable work posture allowing for a more precise reading.

The correct solution is illustrated in the last illustration. During the design stage of the facilities, maintenance and operation activities were recognized. The gauge was installed so that it could be read at ground level. No falls from elevations are possible: therefore, the hazard is eliminated. 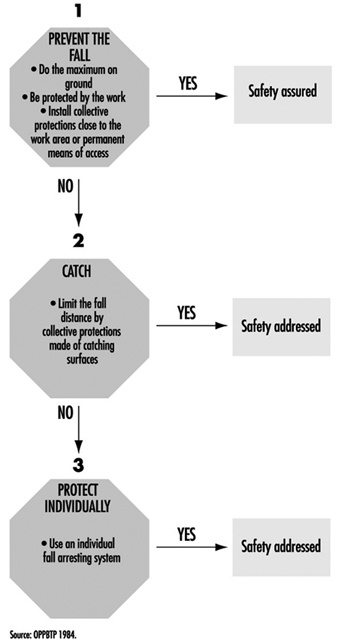 The emphasis on prevention is not an ideological choice, but rather a practical choice. Table 3 shows the differences between fall prevention and fall arrest, the traditional PPE solution.