Indigenous peoples living in coastal areas have for centuries depended on the sea for their survival. In the more tropical waters they have not only fished from traditional boats but also engaged in spear fishing and shell gathering activities, diving either from shore or from boats. The waters in the past were plentiful and there was no need to dive deeply for long periods of time. More recently the situation has changed. Overfishing and the destruction of breeding grounds has made it impossible for indigenous peoples to sustain themselves. Many have turned to diving deeper for longer periods of time in order to bring home a sufficient catch. As the capacity of humans to stay underwater without some form of support is quite limited, indigenous divers in several parts of the world have begun using compressors to supply air from the surface or to use self-contained underwater breathing apparatus (SCUBA) to extend the amount of time that they are able to stay underwater (bottom time).

In the developing world, indigenous divers are found in Central and South America, Southeast Asia and the Pacific. It has been estimated by the University of California at Berkeley, Department of Geography’s Ocean Conservation and Environmental Action Network (OCEAN) Initiative, that there may be as many as 30,000 working indigenous divers in Central America, South America and the Caribbean. (It is estimated that the Moskito Indians in Central America may have a diving population as high as 450 divers.) Researchers at the Divers Diseases Research Centre of the United Kingdom estimate that in the Philippines there may be between 15,000 to 20,000 indigenous divers; in Indonesia the number has yet to be determined but it may be as many as 10,000.

In Southeast Asia some indigenous divers use compressors on boats with air lines or hoses attached to the divers. The compressors are normally commercial type compressors used in filling stations or are compressors salvaged from large trucks and driven by gasoline or diesel engines. Depths may range to more than 90 m and dives may exceed durations of 2 hours. Indigenous divers work to gather fish and shellfish for human consumption, aquaria fish, seashells for the tourist industry, pearl oysters and, at certain times of the year, sea cucumbers. Their fishing techniques include using underwater fish traps, spear fishing and pounding two stones together to drive fish into a net down current. Lobsters, crabs and shellfish are gathered by hand (see figure 1). 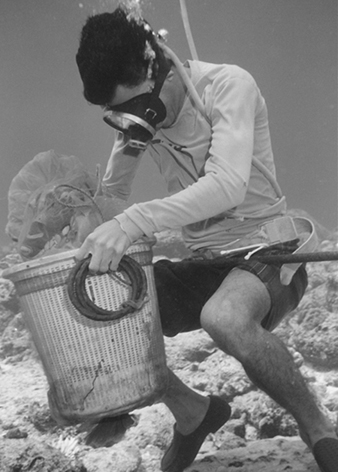 In Thailand there are approximately 400 divers using compressors and living on the west coast. They are known as Sea Gypsies and were once a nomadic people that have settled in 12 rather permanent villages in three provinces. They are literate and almost all have completed compulsory education. Virtually all of the divers speak Thai and most speak their own language, Pasa Chaaw Lee, which is an unwritten Malay language.

Only males dive, starting as young as 12 years of age and stopping, if they survive, around the age of 50. They dive from open boats, ranging from 3 to 11 m in length. The compressors used are powered by either a gasoline or a diesel powered motor and are primitive, cycling unfiltered air into a pressure tank and down 100 m of hose to a diver. This practice of using ordinary air compressors without filtration can lead to contamination of breathing air with carbon monoxide, nitrogen dioxide from diesel motors, lead from leaded gasoline and combustion particulates. The hose is attached to a normal diving mask which covers the eyes and nose. Inspiration and expiration is done through the nose, with the expired air escaping from the skirt of the mask. The only protection from marine life and the temperature of the water is a roll collar, a long sleeve shirt, a pair of plastic shoes and a pair of athletic style trousers. A pair of cotton mesh gloves offers the hands a certain degree of protection (see figure 2).

Figure 2.  A diver off of Phuket, Thailand, preparing to dive from an open boat. 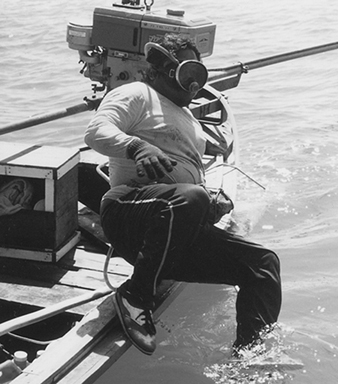 A research project was developed in concert with Thailand’s Ministry of Public Health to study the diving practices of the Sea Gypsies and to develop educational and informational interventions to raise the divers’ awareness of the risks they face and measures that can be taken to reduce those risks. As part of this project 334 divers were interviewed by trained public health care workers in 1996 and 1997. The response rate to the questionnaires was over 90%. Although the survey data are still under analysis, several points have been extracted for this case study.

Regarding diving practices, 54% of the divers were asked how many dives they made on their last day of diving. Of the 310 divers that responded to the question, 54% indicated that they made less than 4 dives; 35% indicated 4 to 6 dives and 11% indicated 7 or more dives.

When asked about the depth of their first dive of their last day of diving, of the 307 divers who responded to this question, 51% indicated 18 m or less; 38% indicated between 18 and 30 m; 8% indicated between 30 and 40 m; 2% indicated more than 40 m, with one diver reporting a dive at a depth of 80 m. A 16 year-old diver in one village reported that he had performed 20 dives on his last day of diving to depths of less than 10 m. Since he has been diving he has been struck 3 times by decompression sickness.

A high frequency of dives, deep depths, long bottom times and short surface intervals are factors which can increase the risk of decompression sickness.

An early random sampling of the survey revealed that the 3 most significant risks included an interruption of the air supply leading to an emergency ascent, injury from marine life and decompression sickness.

Unlike sport or professional divers, the indigenous diver has no alternative air supply. A cut, crimped or separated air hose leaves only two options. The first is to find a fellow diver and share air from one mask, a skill which is virtually unknown to the Sea Gypsies; the second is an emergency swim to the surface, which can and frequently does lead to barotrauma (injury related to rapidly reducing pressure) and decompression sickness (caused by expanding nitrogen gas bubbles in the blood and tissue as the diver surfaces). When asked about separation from diving partners during working dives, of the 331 divers who responded to the question, 113 (34%) indicated that they worked 10 m or more away from their partners and an additional 24 indicated that they were not concerned about the whereabouts of partners during dives. The research project is currently instructing the divers how to share air from one mask while encouraging them to dive closer together.

Since indigenous divers are frequently working with dead or injured marine life, there is always the potential that a hungry predator may also attack the indigenous diver. The diver may also be handling poisonous marine animals, thus increasing the risk of illness or injury.

On the implementation side of this project, 16 health care workers at the village level along with 3 Sea Gypsies have been taught to be trainers. Their task is to work with the divers on a boat-by-boat basis using short (15 minute) interventions to raise the awareness of the divers about the risks they face; give the divers the knowledge and skills to reduce those risks; and develop emergency procedures to assist sick or injured divers. The train-the-trainer workshop developed 9 rules, a short lesson plan for each rule and an information sheet to use as a handout.

The rules are as follows:

The Sea Gypsies were born and raised next to or on the sea. They depend on the sea for their existence. Although they are sickened or injured as a result of their diving practices they continue to dive. The interventions listed above will probably not stop the Sea Gypsies from diving, but they will make them aware of the risk they face and provide them the means to reduce this risk.