The first practical design of a lead-acid battery was developed by Gaston Planté in 1860, and production has continued to grow steadily since. Automotive batteries represent the major use of lead-acid technology, followed by industrial batteries (stand-by power and traction). More than half the worldwide production of lead goes into batteries.

The low cost and ease of manufacture of lead-acid batteries in relation to other electrochemical couples should ensure a continuing demand for this system in the future.

The lead-acid battery has a positive electrode of lead peroxide (PbO2) and a negative electrode of high surface area spongy lead (Pb). The electrolyte is a sulphuric acid solution with specific gravity in the range 1.21 to 1.30 (28 to 39% by weight). On discharge, both electrodes convert to lead sulphate, as shown below:

The manufacturing process, which is shown in the process flow chart (figure 1), is described below: 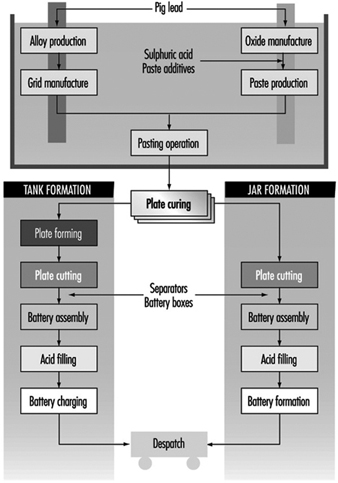 Oxide manufacture: Lead oxide is manufactured from pigs of lead (masses of lead from smelting furnaces) by one of two methods—a Barton Pot or a milling process. In the Barton Pot process, air is blown over molten lead to produce a fine stream of lead droplets. The droplets react with oxygen in the air to form the oxide, which consists of a core of lead with a lead oxide (PbO) coating.

In the milling process, solid lead (which may range in size from small balls to complete pigs) is fed into a rotating mill. The tumbling action of the lead generates heat and the surface of the lead oxidizes. As the particles roll around in the drum, the surface layers of oxide are removed to expose more clean lead for oxidation. The airstream carries the powder to a bag filter, where it is collected.

Grid production: Grids are produced mainly by casting (both automatic and manual) or, particularly for automotive batteries, expansion from wrought or cast lead alloy.

Pasting: Battery paste is made by mixing the oxide with water, sulphuric acid and a range of proprietary additives. The paste is pressed by machine or hand into the grid lattice, and the plates are usually flash-dried in a high-temperature oven.

Pasted plates are cured by storing them in ovens under carefully controlled conditions of temperature, humidity and time. Free lead in the paste converts to lead oxide.

Formation, plate cutting and assembly: Battery plates undergo an electrical formation process in one of two ways. In tank formation, plates are loaded into large baths of dilute sulphuric acid and a direct current is passed to form the positive and negative plates. After drying, the plates are cut and assembled, with separators between them, into battery boxes. Plates of like polarity are connected by welding together the plate lugs.

In jar formation, the plates are electrically formed after being assembled into battery boxes.

Lead is the major health hazard associated with battery manufacture. The principal exposure route is through inhalation, but ingestion can also pose a problem if insufficient attention is paid to personal hygiene. Exposure can occur at all stages of production.

Lead oxide manufacture is potentially very hazardous. Exposures are controlled by automating the process, thus removing the workers from the hazard. In many factories the process is operated by one person.

In grid casting, exposures to lead fumes are minimized by the use of local exhaust ventilation (LEV) together with thermostatic control of lead pots (lead fume emissions increase markedly above 500 C). Lead-bearing dross, which forms on top of the molten lead, can also cause problems. The dross contains a large amount of very fine dust, and great care has to be exercised when disposing of it.

Pasting areas have traditionally resulted in high lead exposures. The manufacturing method often results in splashes of lead slurry getting onto machinery, the floor, aprons and boots. These splashes dry out and produce airborne lead dust. Control is achieved by keeping the floor permanently wetted and frequently sponging down aprons.

Lead exposures in other departments (forming, plate cutting and assembly) occur through handling dry, dusty plates. Exposures are minimized by LEV together with appropriate use of personal protective equipment.

Many countries have legislation in place to limit the degree of occupational exposure, and numerical standards exist for lead-in-air and blood lead levels.

An occupational health professional is normally employed to take blood samples from exposed workers. The frequency of blood testing can range from annual for low-risk workers to quarterly for those in high-risk departments (e.g., pasting). If a worker’s blood lead level exceeds the statutory limit, then the worker should be removed from any work exposure to lead until the blood lead falls to a level deemed acceptable by the medical adviser.

Air sampling for lead is complementary to blood lead testing. Personal, rather than static, sampling is the preferred method. A large number of lead-in-air samples is usually required because of the inherent variability in results. Use of the correct statistical procedures in analysing the data can give information on sources of lead and can provide a basis for making improvements to engineering design. Regular air sampling can be used to assess the continuing effectiveness of control systems.

The allowable lead-in-air concentrations and blood lead concentrations vary from country to country, and presently range from 0.05 to 0.20 mg/m3 and 50 to 80 mg/dl respectively. There is a continuing downward trend in these limits.

In addition to the normal engineering controls, other measures are necessary to minimize lead exposures. There should be no eating, smoking, drinking or gum chewing in any production area.

During the formation process the active material on the plates is converted to PbO2 at the positive and Pb at the negative electrode. As the plates become fully charged, the formation current begins to dissociate the water in the electrolyte into hydrogen and oxygen:

Gassing generates sulphuric acid mist. Tooth erosion was, at one time, a common feature among workers in formation areas. Battery companies have traditionally employed the services of a dentist, and many continue to do so.

Recent studies (IARC 1992) have suggested a possible link between exposures to inorganic acid mists (including sulphuric acid) and cancer of the larynx. Research continues in this area.

The occupational exposure standard in the UK for sulphuric acid mist is 1 mg/m3. Exposures can be kept below this level with LEV in place over the formation circuits.

Talc is used in certain hand-casting operations as a mould release agent. Long-term exposure to talc dust can cause pneumoconiosis, and it is important that the dust be controlled by suitable ventilation and process control measures.

Separators are used in lead-acid batteries to electrically insulate the positive from the negative plates. Various types of material have been used over the years (e.g., rubber, cellulose, polyvinyl chloride (PVC), polyethylene), but, increasingly, glass fibre separators are being used. These separators are manufactured from MMFs.

An increased risk of lung cancer amongst workers was demonstrated in the early days of the mineral wool industry (HSE 1990). However, this may have been caused by other carcinogenic materials in use at the time. It is prudent nevertheless to ensure that any exposure to MMFs is kept to a minimum by either total enclosure or LEV.

Antimony and arsenic are commonly used in lead alloys, and stibine (SbH3) or arsine (AsH3) can be produced under certain circumstances:

Stibine and arsine are both highly toxic gases which act by destroying red blood cells. Strict process controls during battery manufacture should prevent any risk of exposure to these gases.

A variety of physical hazards also exists in battery manufacturing (e.g., noise, molten metal and acid splashes, electrical hazards and manual handling), but the risks from these can be reduced by appropriate engineering and process controls.

The effect of lead on the health of children has been extensively studied. It is therefore very important that environmental releases of lead be kept to a minimum. For battery factories, the most polluting air emissions should be filtered. All process waste (usually an acidic lead-bearing slurry) should be processed at an effluent treatment plant to neutralize the acid and settle out the lead from the suspension.

It is likely that there will be increasing restrictions on the use of lead in the future. In an occupational sense this will result in increasing automation of processes so that the worker is removed from the hazard.