The term battery refers to a collection of individual cells, which can generate electricity though chemical reactions. Cells are categorized as either primary or secondary. In primary cells, the chemical reactions that produce the electron flow are not reversible, and therefore the cells are not easily recharged. Conversely, secondary cells must be charged prior to their use, which is achieved by passing an electrical current through the cell. Secondary cells have the advantage that they can often be repeatedly recharged and discharged through use.

The classic primary battery in everyday use is the Leclanché dry cell, so called because the electrolyte is a paste, not a liquid. The Leclanché cell is typified by the cylindrical batteries used in flashlights, portable radios, calculators, electric toys and the like. In recent years, alkaline batteries, such as the zinc-manganese dioxide cell, have become more prevalent for this type of use. Miniature or “button” batteries have found use in hearing aids, computers, watches, cameras and other electronic equipment. The silver oxide-zinc cell, mercury cell, the zinc-air cell, and the lithium-manganese dioxide cell are some examples. See figure 1 for a cutaway view of a typical alkaline miniature battery. 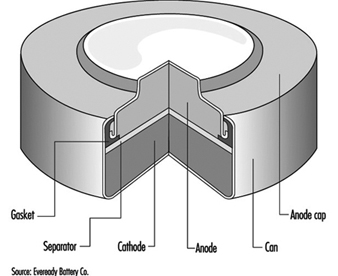 The classic secondary or storage battery is the lead-acid battery, widely used in the transportation industry. Secondary batteries are also used in power plants and industry. Rechargeable, battery-operated tools, toothbrushes, flashlights and the like are a new market for secondary cells. Nickel-cadmium secondary cells are becoming more popular, especially in pocket cells for emergency lighting, diesel starting and stationary and traction applications, where the reliability, long life, frequent rechargeability and low-temperature performance outweigh their extra cost.

Rechargeable batteries under development for use in electric vehicles utilize lithium-ferrous sulphide, zinc-chlorine and sodium-sulphur.

Table 1 gives the composition of some common batteries.

While there are clear differences in the manufacture of the different types of batteries, there are several processes which are common: weighing, grinding, mixing, compressing and drying of constituent ingredients. In modern battery plants many of these processes are enclosed and highly automated, using sealed equipment. Therefore, exposure to the various ingredients can occur during weighing and loading and during cleaning of the equipment.

In older battery plants, many of the grinding, mixing and other operations are done manually, or the transfer of ingredients from one step of the process to another is done manually. In these instances, the risk of inhalation of dusts or skin contact with corrosive substances is high. Precautions for dust-producing operations include total enclosure and mechanized handling and weighing of powders, local exhaust ventilation, daily wet mopping and/or vacuuming and wearing of respirators and other personal protective equipment during maintenance operations.

Noise is also a hazard, since compressing machines and wrapping machines are noisy. Noise control methods and hearing conservation programmes are essential.

The electrolytes in many batteries contain corrosive potassium hydroxide. Enclosure and skin and eye protection are indicated precautions. Exposures can also occur to the particulates of toxic metals such as cadmium oxide, mercury, mercuric oxide, nickel and nickel compounds, and lithium and lithium compounds, which are used as anodes or cathodes in particular types of batteries. The lead-acid storage battery, sometimes referred to as the accumulator, can involve considerable lead exposure hazards and is discussed separately in the article “Lead-acid battery manufacture”.

Lithium metal is highly reactive, thus lithium batteries must be assembled in a dry atmosphere in order to avoid the lithium reacting with water vapour. Sulphur dioxide and thionyl chloride, used in some lithium batteries, are respiratory hazards. Hydrogen gas, used in nickel-hydrogen batteries, is a fire and explosion hazard. These, as well as materials in newly developed batteries, will require special precautions.

Leclanché dry-cell batteries are produced as shown in figure 2. The positive electrode or cathode mixture comprises 60 to 70% manganese dioxide, the remainder being made up of graphite, acetylene black, ammonium salts, zinc chloride and water. Dry, finely ground manganese dioxide, graphite and acetylene black are weighed and fed into a grinder-mixer; electrolyte containing water, zinc chloride and ammonium chloride is added, and the prepared mixture is pressed on a hand-fed tableting or agglomerating press. In certain cases, the mixture is dried in an oven, sifted and remoistened before tableting. The tablets are inspected and wrapped on hand-fed machines after being allowed to harden for a few days. The agglomerates are then placed in trays and soaked in electrolyte, and are now ready for assembly.

The anode is the zinc case, which is prepared from zinc blanks on a hot press (or zinc sheets are folded and welded to the case). An organic gelatinous paste consisting of maize and flour starches soaked in electrolyte is mixed in large vats. The ingredients are usually poured in from sacks without weighing. The mixture is then purified with zinc chips and manganese dioxide. Mercuric chloride is added to the electrolyte to form an amalgam with the interior of the zinc container. This paste will form the conducting medium or electrolyte.

Cells are assembled by automatic pouring of the required amount of gelatinous paste into the zinc cases to form an inner sleeve lining on the zinc container. In some cases, the cases receive a chromate finish by the pouring in and emptying of a mixture of chromic and hydrochloric acid before adding the gelatinous paste. The cathode agglomerate is then placed in position in the centre of the case. A carbon rod is placed centrally in the cathode to act as the current collector.

The zinc cell is then sealed with molten wax or paraffin and heated with a flame to give a better seal. The cells are then welded together to form the battery. The reaction of the battery is:

Workers may be exposed to manganese dioxide during weighing, mixer loading, grinding, cleaning the oven, sifting, hand pressing and wrapping, depending on the degree of automation, sealed enclosure and local exhaust ventilation. In manual pressing and wet wrapping, there may be exposure to the wet mixture, which can dry to produce inhalable dust; dermatitis may occur from exposure to the slightly corrosive electrolyte. Personal hygiene measures, gloves and respiratory protection for cleaning and maintenance operations, showering facilities and separate lockers for work and street clothes can reduce these risks. As mentioned above, noise hazards can result from the wrapping and tableting press.

Exposure to spills of chromic acid and hydrochloric acid during chromating and exposure to welding fumes and fumes from heating the sealing compound are also possible. Mechanization of the chromating process, use of gloves and LEV for heat sealing and welding are suitable precautions.

The most common method today of making nickel-cadmium electrodes is by depositing the active electrode material directly into a porous sintered nickel substrate, or plate. (See figure 3.) The plate is prepared by pressing a paste of sintered grade nickel powder (often made by decomposition of nickel carbonyl) into the open grid of nickel-plated perforated sheet steel (or nickel gauze or nickel-plated steel gauze) and then sintering or drying in an oven. These plates may then be cut, weighed and coined (compressed) for particular purposes or rolled into a spiral for household-type cells.

An alternative way of making cadmium electrodes is to prepare a paste of cadmium oxide mixed with graphite, iron oxide and paraffin, which is milled and finally compacted between rollers to form the active material. This is then pressed into a moving perforated steel strip that is dried, sometimes compressed, and cut into plates. Lugs may be attached at this stage.

The next steps involve cell and battery assembly. For large batteries, the individual electrodes are then assembled into electrode groups with plates of opposite polarity interleaved with plastic separators. These electrode groups may be bolted or welded together and placed in a nickel-plated steel casing. More recently, plastic battery casings have been introduced. The cells are filled with an electrolyte solution of potassium hydroxide, which may also contain lithium hydroxide. The cells are then assembled into batteries and bolted together. Plastic cells may be cemented or taped together. Each cell is connected with a lead connector to the adjacent cell, leaving a positive and negative terminal at the ends of the battery.

For cylindrical batteries, the impregnated plates are assembled into electrode groups by winding the positive and negative electrodes, separated by an inert material, into a tight cylinder. The electrode cylinder is then placed in a nickel-plated metal case, potassium hydroxide electrolyte is added and the cell is sealed by welding.

The chemical reaction involved in the charging and discharging of nickel-cadmium batteries is:

The major potential exposure to cadmium occurs from handling of cadmium nitrate and its solution while making paste from cadmium oxide powder and handling the dried active powders. Exposure can also occur during reclamation of cadmium from scrap plates. Enclosure and automated weighing and mixing can reduce these hazards during the early steps.

The most serious health hazards in traditional battery making are lead, cadmium, mercury and manganese dioxide exposures. Lead hazards are discussed elsewhere in this chapter and Encyclopaedia. Cadmium can cause kidney disease and is carcinogenic. Cadmium exposure was found to be widespread in US nickel-cadmium battery plants, and many workers have had to be medically removed under the Occupational Safety and Health Administration’s Cadmium Standard provisions due to high cadmium levels in blood and urine (McDiarmid et al. 1996). Mercury affects the kidneys and nervous system. Excessive exposure to mercury vapour has been shown in studies of several mercury battery plants (Telesca 1983). Manganese dioxide exposures have been shown to be high in powder mixing and handling in alkaline dry cell manufacturing (Wallis, Menke and Chelton 1993). This can result in neurofunctional deficits in battery workers (Roels et al. 1992). Manganese dusts can, if absorbed in excessive quantities, lead to disorders of the central nervous system similar to Parkinson’s syndrome. Other metals of concern include nickel, lithium, silver and cobalt.

Skin burns can result from exposure to zinc chloride, potassium hydroxide, sodium hydroxide and lithium hydroxide solutions used in the electrolytes of batteries.