Liquid crystal displays (LCDs) have been commercially available since the 1970s. They are commonly used in watches, calculators, radios and other products requiring indicators and three or four alphanumeric characters. Recent improvements in the liquid crystal materials allow large displays to be manufactured. While LCDs are only a small portion of the semiconductor industry, their importance has grown with their use in flat-panel displays for portable computers, very light laptop computers and dedicated word processors. The importance of LCDs is expected to continue to grow as they eventually replace the last vacuum tube commonly used in electronics—the cathode ray tube (CRT) (O’Mara 1993).

The manufacture of LCDs is a very specialized process. Industrial hygiene monitoring results indicate very low airborne contaminant levels for the various solvent exposures monitored (Wade et al. 1981). In general, the types and quantities of toxic, corrosive and flammable solid, liquid and gaseous chemicals and hazardous physical agents in use are limited in comparison with other types of semiconductor manufacturing.

Liquid crystal materials are rod-like molecules exemplified by the cyanobiphenyl molecules shown in figure 1. These molecules possess the property of rotating the direction of polarized light passing through. Although the molecules are transparent to visible light, a container of the liquid material appears milky or translucent instead of transparent. This occurs because the long axis of the molecules are aligned at random angles, so the light is scattered randomly. A liquid crystal display cell is arranged so that the molecules follow a specific alignment. This alignment can be changed with an external electric field, allowing the polarization of incoming light to be changed. 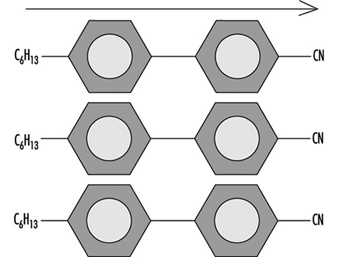 In the manufacture of flat panel displays, two glass substrates are processed separately, then joined together. The front substrate is patterned to create a colour filter array. The rear glass substrate is patterned to form thin film transistors and the metal interconnect lines. These two plates are mated in the assembly process and, if necessary, sliced and separated into individual displays. Liquid crystal material is injected into a gap between the two glass plates. The displays are inspected and tested and a polarizer film is applied to each glass plate.

The glass substrate is an essential and expensive component of the display. Very tight control of the optical and mechanical properties of the material is required at every stage of the process, especially when heating is involved.

Two processes are used to make very thin glass with very precise dimensions and reproducible mechanical properties. The fusion process, developed by Corning, utilizes a glass feed rod that melts in a wedge-shaped trough and flows up and over the sides of the trough. Flowing down both sides of the trough, the molten glass joins into a single sheet at the bottom of the trough and can be drawn downward as a uniform sheet. The thickness of the sheet is controlled by the speed of drawing down the glass. Widths of up to almost 1 m can be obtained.

Other manufacturers of glass with the appropriate dimensions for LCD substrates use the float method of manufacturing. In this method, the molten glass is allowed to flow out onto a bed of molten tin. The glass does not dissolve or react with the metallic tin, but floats on the surface. This allows gravity to smooth the surface and allow both sides to become parallel. (See the chapter Glass, ceramics and related materials.)

A variety of substrate sizes are available extending to 450 × 550 mm and larger. Typical glass thickness for flat panel displays is 1.1 mm. Thinner glass is used for some smaller displays, such as pagers, telephones, games and so on.

Glass substrates are trimmed to size after the fusion or float process, typically to about 1 m on a side. Various mechanical operations follow the forming process, depending on the ultimate application of the material.

Since glass is brittle and easily chipped or cracked at the edges, these are typically bevelled, chamfered or otherwise treated to reduce chipping during handling. Thermal stresses at edge cracks accumulate during substrate processing and lead to breakage. Glass breakage is a significant problem during production. Besides the possibility of employee cuts and lacerations, it represents a yield loss, and glass fragments might remain in equipment, causing particulate contamination or scratching of other substrates.

Increased substrate size results in increased difficulties for glass polishing. Large substrates are mounted to carriers using wax or other adhesive and polished using a slurry of abrasive material. This polishing process must be followed by a thorough chemical cleaning to remove any remaining wax or other organic residue, as well as the metallic contaminants contained in the abrasive or polishing medium.

Cleaning processes are used for bare glass substrates and for substrates covered with organic films, such as colour filters, polyimide orientation films and so on. Also, substrates with semiconductor, insulator and metal films require cleaning at certain points within the fabrication process. As a minimum, cleaning is required prior to each masking step in colour filter or thin film transistor fabrication.

Most flat panel cleaning employs a combination of physical and chemical methods, with selective use of dry methods. After chemical etching or cleaning, substrates are usually dried using isopropyl alcohol. (See table 1.)

Colour filter formation on the front glass substrate includes some of the glass finishing and preparation steps common to both the front and rear panels, including the bevelling and lapping processes. Operations such as patterning, coating and curing are performed repeatedly on the substrate. Many points of similarity with silicon wafer processing exist. Glass substrates are normally handled in track systems for cleaning and coating.

Various materials and application methods are used to create colour filters for various flat panel display types. Either a dyestuff or a pigment can be used, and either one can be deposited and patterned in several ways. In one approach, gelatin is deposited and dyed in successive photolithographic operations, using proximity printing equipment and standard photoresists. In another, pigments dispersed in photoresist are employed. Other methods for forming colour filters include electrodeposition, etching and printing.

After colour filter formation, the final step is the sputter deposition of a transparent electrode material. This is indium-tin oxide (ITO), which is actually a mixture of the oxides In2O3 and SnO2. This material is the only one suitable for the transparent conductor application for LCDs. A thin ITO film is required on both sides of the display. Typically, ITO films are made using vacuum evaporation and sputtering.

Thin films of ITO are easy to etch with wet chemicals such as hydrochloric acid, but, as the pitch of the electrodes becomes smaller and features become finer, dry etching may be necessary to prevent undercutting of the lines due to overetching.

Thin film transistor formation is very similar to the fabrication of an integrated circuit.

Once the thin film has been deposited, a photoresist is applied and imaged to allow etching of the thin film to the appropriate dimensions. A sequence of thin films is deposited and etched, as with integrated circuit fabrication.

On both the upper and bottom substrate, a thin polymer film is deposited for orientation of the liquid crystal molecules at the glass surface. This orientation film, perhaps 0.1 μm thick, may be a polyimide or other “hard” polymer material. After deposition and baking, it is rubbed with fabric in a specific direction, leaving barely detectable grooves in the surface. Rubbing can be done with a once through cloth on a belt, fed from a roller on one side, passing under a roller which contacts the substrate, onto a roller on the other side. The substrate moves underneath the cloth in the same direction as the cloth. Other methods include a travelling brush that moves across the substrate. The nap of the rubbing material is important. The grooves serve to aid the liquid crystal molecules to align at the substrate surface and to assume the proper tilt angle.

The orientation film can be deposited by spin coating or by printing. The printing method is more efficient in material usage; 70 to 80% of the polyimide is transferred from the printing roll to the substrate surface.

Once the substrate rubbing step is completed, an automated assembly line sequence is begun, which consists of:

Automated transport of both top and bottom plates occurs through the line. One plate receives the adhesive, and the second plate is introduced at the spacer applicator station.

In the case where more than one display has been constructed on the substrate, the displays are now separated by slicing. At this point, the liquid crystal material can be introduced into the gap between the substrates, making use of a hole left in the seal material. This entrance hole is then sealed and prepared for final inspection. Liquid crystal materials are often delivered as two or three component systems which are mixed at injection. Injection systems provide mixing and purging of the cell to avoid trapping bubbles during the filling process.

Inspection and functional testing are performed after assembly and liquid crystal injection. Most defects are related to particles (including point and line defects) and cell gap problems.

The final manufacturing step for the liquid crystal display itself is the application of the polarizer to the outside of each glass plate. Polarizer films are composite films which contain the pressure-sensitive adhesive layer needed to attach the polarizer to the glass. They are applied by automated machines which dispense the material from rolls or pre-cut sheets. The machines are variants of labelling machines developed for other industries. The polarizing film is attached to both sides of the display.

In some cases, a compensation film is applied prior to the polarizer. Compensation films are polymer films (e.g., polycarbonate and polymethyl methacrylate) that are stretched in one direction. This stretching changes the optical properties of the film.

A completed display will ordinarily have driver integrated circuits mounted on or near one of the glass substrates, usually the thin film transistor side.

Glass breakage is a significant hazard in LCD manufacturing. Cuts and lacerations can occur. Exposure to chemicals used for cleaning is another concern.