The concept of mental workload (MWL) has become increasingly important since modern semi-automated and computerized technologies may impose severe requirements on human mental or information-processing capabilities within both manufacturing and administrative tasks. Thus, especially for the domains of job analysis, evaluation of job requirements and job design, the conceptualization of mental workload has become even more important than that of traditional physical workload.

There is no agreed-upon definition of mental workload. The main reason is that there are at least two theoretically well-based approaches and definitions: (1) MWL as viewed in terms of the task requirements as an independent, external variable with which the working subjects have to cope more or less efficiently, and (2) MWL as defined in terms of an interaction between task requirements and human capabilities or resources (Hancock and Chignell 1986; Welford 1986; Wieland-Eckelmann 1992).

Although arising from different contexts, both approaches offer necessary and well-founded contributions to different problems.

The requirements resources interaction approach was developed within the context of personality-environment fit/misfit theories which try to explain interindividually differing responses to identical physical and psychosocial conditions and requirements. Thus, this approach may explain individual differences in the patterns of subjective responses to loading requirements and conditions, for example, in terms of fatigue, monotony, affective aversion, burnout or diseases (Gopher and Donchin 1986; Hancock and Meshkati 1988).

The task requirements approach was developed within those parts of occupational psychology and ergonomics which are predominantly engaged in task design, especially in the design of new and untried future tasks, or so-called prospective task design. The background here is the stress-strain concept. Task requirements constitute the stress and the working subjects try to adapt to or to cope with the demands much as they would to other forms of stress (Hancock and Chignell 1986). This task requirements approach tries to answer the question of how to design tasks in advance in order to optimize their later impact on the—often still unknown—employees who will accomplish these future tasks.

There are at least a few common characteristics of both conceptualizations of MWL.

From the person-environment fit point of view, MWL and its consequences may be roughly categorized—as is shown in figure 1—into underload, properly fitting load, and overload. This categorization results from the relationships between task requirements and mental capabilities or resources. Task requirements may exceed, fit with or fail to be satisfied by the resources. Both types of misfit may result from quantitative or qualitative modes of misfit and will have qualitatively differing, but in any case negative, consequences (see figure 1). 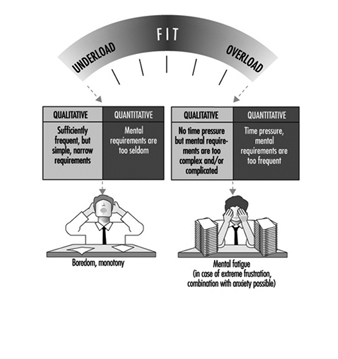 Some theories attempt to define MWL starting from the resource or capacity side of the requirements, namely, resources relationships. These resource theories might be subdivided into resource volume and resource allocation theories (Wieland-Eckelmann 1992). The amount of available capacity may come from a single source (single resource theories) which determines processing. The availability of this resource varies with arousal (Kahneman 1973). Modern multiple resource theories suppose a set of relatively independent processing resources. Thus, performance will depend on the condition whether the same resource or different resources are required simultaneously and concurrently. Different resources are, for example, encoding, processing or responding resources (Gopher and Donchin 1986; Welford 1986). The most critical problem for these types of theories is the reliable identification of one or more well-defined capacities for qualitatively different processing operations.

Resource allocation theories suppose qualitatively changing processing as a function of varying strategies. Depending on the strategies, differing mental processes and representations may be applied for task accomplishment. Thus, not the volume of stable resources but flexible allocation strategies become the key point of interest. Again, however, essential questions—especially concerning the methods of diagnosis of the strategies—remain to be answered.

A strict measurement of MWL at present would be impossible since well-defined units of measurement are lacking. But, to be sure, the conceptualization and the instruments for an assessment should meet the general quality criteria of diagnostic approaches, which have objectivity, reliability, validity and usefulness. However, as of now, only a little is known about the overall quality of proposed techniques or instruments.

There are a sizeable number of reasons for the remaining difficulties with assessing MWL according to the requirement-resource approaches (O’Donnell and Eggemeier 1986). An attempt at MWL assessment has to cope with questions like the following: is the task self-intended, following self-set goals, or is it directed with reference to an externally defined order? Which type of capacities (conscious intellectual processing, application of tacit knowledge, etc.) are required, and are they called upon simultaneously or sequentially? Are there different strategies available and, if so, which ones? Which coping mechanisms of a working person might be required?

The most often discussed approaches try to assess MWL in terms of:

Both approaches are heavily dependent on the assumptions of single resource theories and consequently have to struggle with the above-mentioned questions.

Effort assessment. Such effort assessment techniques as, for example, the scaling procedure applied to a perceived correlate of the general central activation, developed and validated by Bartenwerfer (1970), offer verbal scales which may be completed by graphic ones and which grade the unidimensionally varying part of the perceived required effort during task accomplishment. The subjects are requested to describe their perceived effort by means of one of the steps of the scale provided.

The quality criteria mentioned above are met by this technique. Its limitations include the unidimensionality of the scale, covering an essential but questionable part of perceived effort; the limited or absent possibility of forecasting perceived personal task outcomes, for example, in terms of fatigue, boredom or anxiety; and especially the highly abstract or formal character of effort which will identify and explain nearly nothing of the content-dependent aspects of MWL as, for example, any possible useful applications of the qualification or the learning options.

Mental capacity assessment. The mental capacity assessment consists of the dual task techniques and a related data interpretation procedure, called the performance operating characteristic (POC). Dual task techniques cover several procedures. Their common feature is that subjects are requested to perform two tasks simultaneously. The crucial hypothesis is: the less an additional or secondary task in the dual task situation will deteriorate in comparison with the base-line single task situation, the lower the mental capacity requirements of the primary task, and vice versa. The approach is now broadened and various versions of task interference under dual task conditions are investigated. For example, the subjects are instructed to perform two tasks concurrently with graded variations of the priorities of the tasks. The POC curve graphically illustrates the effects of possible dual-task combinations arising from sharing limited resources among the concurrently performed tasks.

The critical assumptions of the approach mainly consist in the suggestions that every task will require a certain share of a stable, limited conscious (versus unconscious, automated, implicit or tacit) processing capacity, in the hypothetical additive relationship of the two capacity requirements, and in the restriction of the approach to performance data only. The latter might be misleading for several reasons. First of all there are substantial differences in the sensitivity of performance data and subjectively perceived data. Perceived load seems to be determined mainly by the amount of required resources, often operationalized in terms of working memory, whereas performance measures seem to be determined predominantly by the efficiency of the sharing of resources, depending on allocation strategies (this is dissociation theory; see Wickens and Yeh 1983). Moreover, individual differences in information processing abilities and personality traits strongly influence the indicators of MWL within the subjective (perceived), performance and psychophysiological areas.

As has been shown, task requirements are multidimensional and, thus, may not be described sufficiently by means of only one dimension, whether it be the perceived effort or the residual conscious mental capacity. A more profound description might be a profile-like one, applying a theoretically selected pattern of graded dimensions of task characteristics. The central issue is thus the conceptualization of “task”, especially in terms of task content, and of “task accomplishment”, especially in terms of the structure and phases of goal-oriented actions. The role of the task is stressed by the fact that even the impact of contextual conditions (like temperature, noise or working hours) on the persons are task-dependent, since they are mediated by the task acting as a gate device (Fisher 1986). Various theoretical approaches sufficiently agree regarding those critical task dimensions, which offer a valid prediction of the task outcome. In any case, task outcome is twofold, since (1) the intended result must be achieved, meeting the performance-outcome criteria, and (2) a number of unintended personal short-term and cumulative long-term side effects will emerge, for example fatigue, boredom (monotony), occupational diseases or improved intrinsic motivation, knowledge or skills.

Assessment of MWL. With task requirement approaches, action-oriented approaches like those of complete versus partialized actions or the motivation potential score (for an elaboration of both see Hacker 1986), propose as indispensable task characteristics for analysis and evaluation at least the following:

The identification of these task characteristics requires the joint procedures of job/task analysis, including document analyses, observations, interviews and group discussions, which must be integrated in a quasi-experimental design (Rudolph, Schönfelder and Hacker 1987). Task analysis instruments which may guide and assist the analysis are available. Some of them assist only the analysis (for example, NASA-TLX Task Load Index, Hart and Staveland, 1988) while others are useful for evaluation and design or redesign. An example here is the TBS-GA (Tätigkeitsbewertungs System für geistige Arbeit [Task Diagnosis Survey—Mental Work]); see Rudolph, Schönfelder and Hacker (1987).

More in this category: Vigilance »
back to top