At the end of the twentieth century, less than 5% of the workforce in industrialized nations is employed in agriculture, while nearly 50% of the worldwide workforce is engaged in agriculture (Sullivan et al. 1992). The work varies from highly mechanized to the manually arduous. Some agribusiness has been historically international, such as plantation farming and the growing of export crops. Today, agribusiness is international and is organized around commodities such as sugar, wheat and beef. Agriculture covers many settings: family farms, including subsistence agriculture; large corporate farms and plantations; urban farms, including specialty enterprises and subsistence agriculture; and migrant and seasonal work. Crops vary from widely used staples, such as wheat and rice, to specialty crops such as coffee, fruits and seaweed. Moreover, the young and the old engage in agricultural work to a greater extent than any other industry. This article addresses health problems and disease patterns among agricultural workers except for livestock rearing, which is covered in another chapter.

The image of agricultural work is that of a healthy pursuit, far from congested and polluted cities, that provides an opportunity for plenty of fresh air and exercise. In some ways, this is true. US farmers, for example, have a lower mortality rate for ischemic heart disease and cancer as compared with other occupations.

However, agricultural work is associated with a variety of health problems. Agricultural workers are at a high risk for particular cancers, respiratory diseases and injuries (Sullivan et al. 1992). Because of the remote location of much of this work, emergency health services are lacking, and agromedicine has been viewed as a vocation without high social status (see article “Agromedicine” and table 1). The work environment involves exposure to the physical hazards of weather, terrain, fires and machinery; toxicological hazards of pesticides, fertilizers and fuels; and health insults of dust. As shown in table 1, table 2, table 3, table 4, table 5, table 6 and table 7, agriculture is associated with a variety of health hazards. In these tables and the corresponding descriptions that follow, six categories of hazards are summarized: (1) respiratory, (2) dermatological, (3) toxic and neoplastic, (4) injury, (5) mechanical and thermal stress and (6) behavioural hazards. Each table also provides a summary of interventions to prevent or control the hazard.

Agricultural workers are subject to several pulmonary diseases related to exposures at work as shown in table 1. An excess of these diseases has been found in several countries..

Exacerbation of asthma by specific allergens and nonspecific causes has been associated with airborne dust. Several farm antigen exposures can trigger asthma, and they include pollen, storage mites and grain dust. Mucous membrane inflammation is a common reaction to airborne dust in individuals with allergic rhinitis or a history of atopy. Plant parts in grain dust appear to cause mechanical irritation to the eyes, but endotoxin and mycotoxin exposure may also be associated with the inflammation of the eyes, nasal passages and throat.

Chronic bronchitis is more common among farmers than among the general population. The majority of farmers with this illness have a history of exposure to grain dust or work in swine confinement buildings. It is believed that cigarette smoking is additive and a cause of this illness. In addition, acute bronchitis has been described in grain farmers, especially during grain harvest.

Hypersensitivity pneumonitis is caused by repeated antigen exposures from a variety of substances. Antigens include micro-organisms found in spoiled hay, grain and silage. This problem has also been seen among workers who clean out mushroom bed houses.

Farmers may be exposed to several different substances that can cause acute pulmonary responses. Nitrogen dioxide generated in silos can cause death among silo workers. Carbon monoxide generated by combustion sources, including space heaters and internal combustion engines, can cause death of agricultural workers exposed to high concentrations inside of buildings. In addition to toxic exposures, oxygen deficiency in confined spaces on farms is a continuing problem.

Farmers are exposed to several skin hazards, as shown table 2. The most common type of agriculture-related skin disease is irritant contact dermatitis. In addition, allergic contact dermatosis is a reaction to exposures to sensitizers including certain plants and pesticides. Other skin diseases include photo-contact, sun-induced, heat-induced, and arthropod-induced dermatoses.

The skin can be burned in several ways. Burns can result from dry fertilizer, which is hygroscopic and attracts moisture (Deere & Co. 1994). When on the skin, it can draw out moisture and cause skin burns. Liquid anhydrous ammonia is used for injecting nitrogen into the soil, where it expands into a gas and readily combines with moisture. If the liquid or gas contacts the body—especially the eyes, skin and respiratory tract—cell destruction and burns can occur, and permanent injury can result without immediate treatment.

Tobacco croppers and harvesters can experience green tobacco sickness when working with damp tobacco. Water from rain or dew on the tobacco leaves probably dissolves nicotine to facilitate its absorption through the skin. Green tobacco sickness is manifested with complaints of headache, pallor, nausea, vomiting and prostration following the worker’s contact with wet tobacco leaves. Other insults to the skin include arthropod and reptile stings and bites, and thorn punctures, which can carry diseases.

The potential for toxic substances exposure in agriculture is great, as can be seen table 3. Chemicals used in agriculture include fertilizers, pesticides (insecticides, fumigants and herbicides) and fuels. Human exposures to pesticides are widespread in developing countries as well as in the developed countries. The United States has registered more than 900 different pesticides with more than 25,000 brand names. About 65% of the registered uses of pesticides are for agriculture. They are primarily used to control insects and to reduce crop loss. Two-thirds (by weight) of the pesticides are herbicides. Pesticides may be applied to seed, soil, crops or the harvest, and they may be applied with spray equipment or crop dusters. After application, pesticide exposures can result from off-gassing, dispersion by the wind, or contact with the plants through skin or clothing. Dermal contact is the most common type of occupational exposure. A number of health effects have been associated with pesticide exposure. These include acute, chronic, carcinogenic, immunologic, neurotoxic and reproductive effects.

Studies have consistently shown that agricultural workers are at increased risk of death due to injury. In the United States, a study of work-related fatalities for 1980 to 1989 reported rates in agricultural production of 22.9 deaths per 100,000 workers, as compared to 7.0 deaths per 100,000 for all workers. The average fatality rate for males and females, respectively, was 25.5 and 1.5 deaths per 100,000 workers. The leading causes of death in agricultural production were machinery and motor vehicles. Many studies report the tractor as the leading machine involved in fatalities, frequently from tractor rollovers. Other leading causes of death include electrocutions, caught in, flying objects, environmental causes and drowning. Age is an important risk factor related to agricultural fatalities for males. For example, the fatality rate for agricultural workers in the US over the age of 65 was over 50 per 100,000 workers, more than double the overall average (Meyers and Hard 1995) (see figure 1). Table 4 shows several injury hazard exposures, their consequences and recognized interventions. 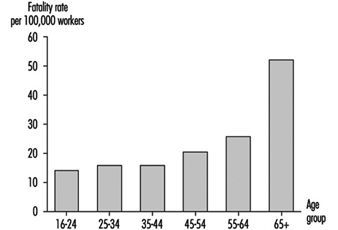 A 1993 survey of farm injuries in the United States found the major injury sources to be livestock (18%), machinery (17%) and hand tools (11%). The most frequent injuries reported in this study were sprain and strain (26%), cut (18%) and fracture (15%). Males represented 95% of the injuries, while the highest concentration of injuries occurred among workers 30 to 39 years of age. Table 5 shows the source and nature of injury and the activity during injury for four major crop production categories. The National Safety Council estimated a US rate of 13.2 occupational injuries and illnesses per 100 crop production workers in 1992. More than half of these injures and illnesses resulted in an average of 39 days away from work. In contrast, the manufacturing and construction sectors had an injury and illness incidence rate of, respectively, 10.8 and 5.4 per 100 workers. In another study in the United States, investigators determined that 65% of all farm injuries required medical attention and that machinery other than tractors caused nearly half of the injuries that resulted in permanent disability (Meridian Research, Inc. 1994; Boxer, Burnett and Swanson 1995).

Table 5. Percentages of lost time injuries by source of injury, nature of injury, and activity for four types of agricultural operations, United States, 1993.

As discussed above, sprains and strains are a significant problem among agricultural workers, and as shown in table 6, agricultural workers are exposed to several mechanical and thermal stresses that result in injury. Many of these problems result from handling heavy loads, repetitive motion, poor posture and dynamic motion. In addition, agricultural vehicle operators are exposed to whole-body vibration. One study reported the prevalence of low-back pain to be 10% greater among tractor drivers.

Noise-induced hearing loss is common among agricultural workers. One study reported that farmers more than 50 years of age have as much as 55% hearing loss. A study of rural students found that they have two times greater hearing loss than urban students.

Some aspects of farming can cause stress among farmers. As shown in table 7, these include isolation, risk taking, patriarchal attitudes, pesticide exposures, unstable economies and weather, and immobility. Problems associated with these circumstances include dysfunctional relationships, conflicts, substance abuse, home violence and suicide. Most suicides associated with depression on farms in North America involve victims who are married and are full-time farmers, and most use firearms to commit suicide. The suicides tend to happen during peak farming periods (Boxer, Burnett and Swanson 1995).