Because the pulp and paper industry is a large consumer of natural resources (i.e., wood, water and energy), it can be a major contributor to water, air and soil pollution problems and has come under a great deal of scrutiny in recent years. This concern appears to be warranted, considering the quantity of water pollutants generated per tonne of pulp (e.g., 55 kg of biological oxygen demand, 70 kg of suspended solids, and up to 8 kg of organochlorine compounds) and the amount of pulp produced globally on an annual basis (approximately 180 million tonnes in 1994). In addition, only about 35% of used paper is recycled, and waste paper is a major contributor to total worldwide solid waste (about 150 million of 500 million tonnes annually).

Historically, pollution control was not considered in the design of pulp and paper mills. Many of the processes used in the industry were developed with little regard for minimizing effluent volume and pollutant concentration. Since the 1970s, pollution abatement technologies have become integral components of mill design in Europe, North America and other parts of the world. Figure 1 illustrates trends over the period 1980 to 1994 in Canadian pulp and paper mills in response to some of these environmental concerns: increased use of wood waste products and recyclable paper as fibre sources; and decreased oxygen demand and chlorinated organics in wastewater.

Figure 1. Environmental indicators in Canadian pulp and paper mills, 1980 to 1994, showing use of wood waste and recyclable paper in production, and biological oxygen demand (BOD) and  organochlorine compounds (AOX) in wastewater effluent. 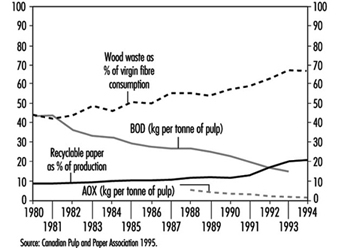 This article discusses the major environmental issues associated with the pulp and paper process, identifies the sources of pollution within the process and briefly describes control technologies, including both external treatment and in-plant modifications. Issues arising from wood waste and anti-sapstain fungicides are dealt with in more detail in the chapter Lumber.

Sulphur oxides are emitted at the highest rates from sulphite operations, especially those using calcium or magnesium bases. The major sources include batch digester blows, evaporators and liquor preparation, with washing, screening and recovery operations contributing lesser amounts. Kraft recovery furnaces are also a source of sulphur dioxide, as are power boilers which use high-sulphur coal or oil as fuel.

Reduced sulphur compounds, including hydrogen sulphide, methyl mercaptan, dimethyl sulphide and dimethyl disulphide, are almost exclusively associated with kraft pulping, and give these mills their characteristic odour. The major sources include the recovery furnace, digester blow, digester relief valves, and washer vents, though evaporators, smelt tanks, slakers, the lime kiln and waste water may also contribute. Some sulphite operations use reducing environments in their recovery furnaces and may have associated reduced sulphur odour problems.

Sulphur gases emitted by the recovery boiler are best controlled by reducing emissions at the source. Controls include black liquor oxidation, reduction in liquor sulphidity, low-odour recovery boilers and proper operation of the recovery furnace. Sulphur gases from digester blow, digester relief valves and liquor evaporation can be collected and incinerated - for example, in the lime kiln. Combustion flue gases can be collected using scrubbers.

Nitrogen oxides are produced as products of high-temperature combustion, and may arise in any mill with a recovery boiler, power boiler or lime kiln, depending on the operating conditions. The formation of nitrogen oxides can be controlled by regulating temperatures, air-fuel ratios and residence time in the combustion zone. Other gaseous compounds are minor contributors to mill air pollution (e.g., carbon monoxide from incomplete combustion, chloroform from bleaching operations, and volatile organics from digester relief and liquor evaporation).

Particulates arise mainly from combustion operations, though smelt-dissolving tanks can also be a minor source. More than 50% of pulp mill particulate is very fine (less than 1 μm in diameter). This fine material includes sodium sulphate (Na2SO4) and sodium carbonate (Na2CO3) from recovery furnaces, lime kilns and smelt-dissolving tanks, and NaCl from burning by-products of logs which have been stored in salt water. Lime kiln emissions include a significant amount of coarse particulates due to entrainment of calcium salts and sublimation of sodium compounds. Coarse particulate may also include fly ash and organic combustion products, especially from power boilers. Reduction of particulate concentrations can be achieved by passing flue gases through electrostatic precipitators or scrubbers. Recent innovations in power boiler technology include fluidized bed incinerators which burn at very high temperatures, result in more efficient energy conversion, and allow burning of less uniform wood waste.

Contaminated wastewater from pulp and paper mills can cause death of aquatic organisms, allow bioaccumulation of toxic compounds in fish, and impair the taste of downstream drinking water. Pulp and paper wastewater effluents are characterized on the basis of physical, chemical or biological characteristics, with the most important being solids content, oxygen demand and toxicity.

The solids content of wastewater is typically classified on the basis of the fraction that is suspended (versus dissolved), the fraction of suspended solids that is settleable, and the fractions of either that are volatile. The settleable fraction is the most objectionable because it may form a dense sludge blanket close to the discharge point, which rapidly depletes dissolved oxygen in the receiving water and allows the proliferation of anaerobic bacteria which generate methane and reduced sulphur gases. Although non-settleable solids are usually diluted by the receiving water and are therefore of less concern, they may transport toxic organic compounds to aquatic organisms. Suspended solids discharged from pulp and paper mills include bark particles, wood fibre, sand, grit from mechanical pulp grinders, papermaking additives, liquor dregs, by-products of water treatment processes and microbial cells from secondary treatment operations.

Wood derivatives dissolved in the pulping liquors, including oligosaccharides, simple sugars, low-molecular-weight lignin derivatives, acetic acid and solubilized cellulose fibres, are the main contributors to both biological oxygen demand (BOD) and chemical oxygen demand (COD). Compounds which are toxic to aquatic organisms include chlorinated organics (AOX; from bleaching, especially kraft pulp); resin acids; unsaturated fatty acids; diterpene alcohols (especially from debarking and mechanical pulping); juvabiones (especially from sulphite and mechanical pulping); lignin degradation products (especially from sulphite pulping); synthetic organics, such as slimicides, oils and greases; and process chemicals, papermaking additives and oxidized metals. The chlorinated organics have been of particular concern, because they are acutely toxic to marine organisms and may bioaccumulate. This group of compounds, including the polychlorinated dibenzo-p-dioxins, have been the major impetus for minimizing chlorine use in pulp bleaching.

The amount and sources of suspended solids, oxygen demand and toxic discharges are process-dependent (table 1). Due to the solubilization of wood extractives with little or no chemical and resin acid recovery, both sulphite and CTMP pulping generate acutely toxic effluents with high BOD. Kraft mills historically used more chlorine for bleaching, and their effluents were more toxic; however, effluents from kraft mills which have eliminated Cl2 in bleaching and use secondary treatment typically exhibit little acute toxicity if any, and subacute toxicity has been greatly reduced.

Suspended solids have become less of a problem because most mills utilize primary clarification (e.g., gravity sedimentation or dissolved air flotation), which removes 80 to 95% of the settleable solids. Secondary wastewater treatment technologies such as aerated lagoons, activated sludge systems and biological filtration are used for reducing BOD, COD and chlorinated organics in the effluent.

A relatively recent pollution control strategy to eliminate water pollution entirely is the “closed mill” concept. Such mills are an attractive alternative in locations that lack large water sources to act as process-supply or effluent-receiving streams. Closed systems have been successfully implemented in CTMP and sodium-base sulphite mills. What distinguishes closed mills is that liquid effluent is evaporated and the condensate is treated, filtered, then reused. Other features of closed mills are enclosed screen rooms, counter-current washing in the bleach plant, and salt control systems. Although this approach is effective at minimizing water pollution, it is not yet clear how worker exposures will be affected by concentrating all contaminant streams within the mill. Corrosion is a major issue facing mills using closed systems, and bacteria and endotoxin concentrations are increased in recycled process water.

The composition of solids (sludges) removed from liquid effluent treatment systems varies, depending on their source. Solids from primary treatment principally consist of cellulose fibres. The major component of solids from secondary treatment is microbial cells. If the mill uses chlorinated bleaching agents, both primary and secondary solids may also contain chlorinated organic compounds, an important consideration in determining the extent of treatment required.

Prior to disposal, sludges are thickened in gravity sedimentation units and mechanically dewatered in centrifuges, vacuum filters or belt or screw presses. Sludges from primary treatment are relatively easy to dewater. Secondary sludges contain a large quantity of intracellular water and exist in a matrix of slime; therefore they require the addition of chemical flocculants. Once sufficiently dewatered, sludge is disposed of in land-based applications (e.g., spread on arable or forested land, used as compost or as a soil conditioner) or incinerated. Although incineration is more costly and can contribute to air pollution problems, it may be advantageous because it can destroy or reduce toxic materials (e.g., chlorinated organics) that could create serious environmental problems if they were to leach into the groundwater from land-based applications.

Solid wastes can be generated in other mill operations. Ash from power boilers can be used in road beds, as construction material and as a dust suppressant. Waste from lime kilns can be used to modify soil acidity and improve soil chemistry.

More in this category: « Cancer
back to top

International Agency on the Research of Cancer (IARC). 1980. Monographs on the Evaluation of Carcinogenic Risks to Humans: Wood, Leather and Some Associated Industries. Vol. 25. Lyon: IARC.

—.1995. Monographs on the Evaluation of Carcinogenic Risks to Humans: Wood Dust and Formaldehyde. Vol. 62. Lyon: IARC.

Torén, K, B Järvholm, and U Morgan. 1989. Mortality from asthma and chronic obstructive pulmonary diseases among workers in a soft paper mill: A case referent study. Br J Ind Med 46:192-195.