Occupational health professionals have generally relied on the following hierarchy of control techniques to eliminate or minimize worker exposures: substitution, isolation, ventilation, work practices, personal protective clothing and equipment. Usually a combination of two or more of these techniques is applied. Although this article focuses primarily on the application of ventilation techniques, the other approaches are briefly discussed. They should not be ignored when attempting to control exposure to chemicals by ventilation.

The occupational health professional should always think of the concept of source-path-receiver. The primary focus should be on control at the source with control of the path the second focus. Control at the receiver should be considered the last choice. Whether it is during the start-up or design phases of a process or during the evaluation of an existing process, the procedure for control of exposure to air contaminants should start at the source and progress to the receiver. It is likely that all or most of these control strategies will need to be used.

The principle of substitution is to eliminate or reduce the hazard by substituting non-toxic or less toxic materials or redesigning the process to eliminate escape of contaminants into the workplace. Ideally, substitute chemicals would be non-toxic or the process redesign would completely eliminate exposure. However, since this is not always possible the subsequent controls in the above hierarchy of controls are attempted.

Note that extreme care should be taken to assure that substitution does not result in a more hazardous condition. While this focus is on the toxicity hazard, the flammable and chemical reactivity of substitutes must also be considered when assessing this risk.

The principle of isolation is to eliminate or reduce the hazard by separating the process emitting the contaminant from the worker. This is accomplished by completely enclosing the process or locating it a safe distance away from people. However, to accomplish this, the process may need to be operated and/or controlled remotely. Isolation is particularly useful for jobs requiring few workers and when control by other methods is difficult. Another approach is to perform hazardous operations on off shifts where fewer workers may be exposed. Sometimes the use of this technique does not eliminate exposure but reduces the number of people who are exposed.

Two types of exhaust ventilation are commonly employed to minimize airborne exposure levels of contaminants. The first is called general or dilution ventilation. The second is referred to as source control or local exhaust ventilation (LEV) and is discussed in more detail later in this article.

These two types of exhaust ventilation should not be confused with comfort ventilation, whose main purpose is to provide measured amounts of outdoor air for breathing and to maintain design temperature and humidity. Various types of ventilation are discussed elsewhere in this Encyclopaedia.

Work practices control encompasses the methods workers employ to perform operations and the extent to which they follow the correct procedures. Examples of this control procedure are given throughout this Encyclopaedia wherever general or specific processes are discussed. General concepts such as education and training, principles of management and social support systems include discussions of the importance of work practices in controlling exposures.

Personal protective equipment (PPE) is considered the last line of defence for control of worker exposure. It encompasses the use of respiratory protection and protective clothing. It is frequently used in conjunction with other control practices, particularly to minimize the effects of unexpected releases or accidents. These issues are discussed in more detail in the chapter Personal protection.

The most efficient and cost-effective form of contaminant control is LEV. This involves capture of the chemical contaminant at its source of generation. There are three types of LEV systems:

Enclosures are the preferable type of hood. Enclosures primarily are designed to contain the materials generated within the enclosure. The more complete the enclosure the more completely the contaminant will be contained. Complete enclosures are those that have no openings. Examples of complete enclosures include glove boxes, abrasive blasting cabinets and toxic gas storage cabinets (see figure 1, figure 2 and figure 3). Partial enclosures have one or more sides open but the source is still inside the enclosure. Examples of partial enclosures are a spray paint booth (see figure 4) and a laboratory hood. Often it might appear that the design of enclosures is more art than science. The basic principle is to design a hood with the smallest opening possible. The volume of air required is usually based on the area of all openings and maintaining an airflow velocity into the opening of 0.25 to 1.0 m/s. The control velocity chosen will depend on the operation’s characteristics, including the temperature and the degree to which the contaminant is propelled or generated. For complex enclosures, extreme care must be taken to assure that the exhaust flow is evenly distributed throughout the enclosure, particularly if the openings are distributed. Many enclosure designs are evaluated experimentally and if demonstrated to be effective are included as design plates in the American Conference of Governmental Industrial Hygienists’ industrial ventilation manual (ACGIH 1992). 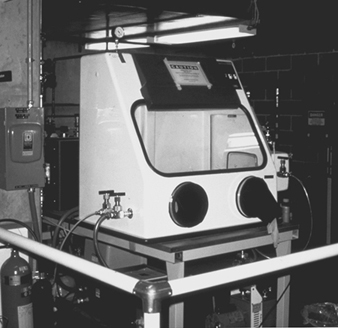 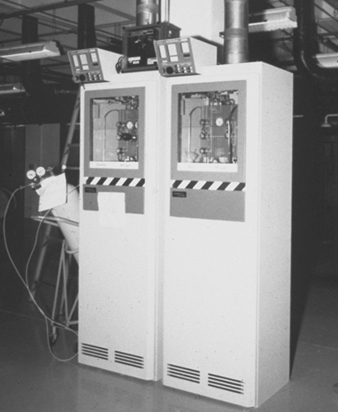 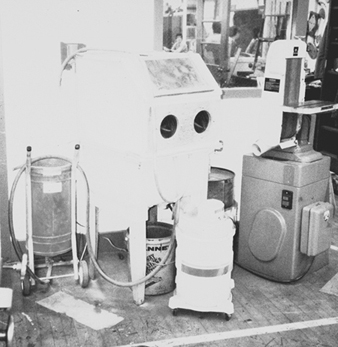 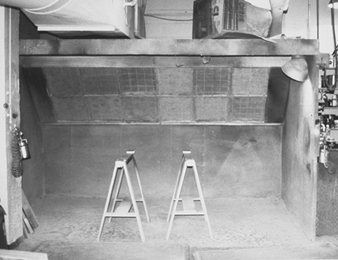 Often, total enclosure of the source is not possible, or is not necessary. In these cases, another form of local exhaust, an exterior or capture hood, can be used. An exterior hood prevents the release of toxic materials into the workplace by capturing or entraining them at or close to the source of generation, usually a work station or process operation. Considerably less air volume is usually required than for the partial enclosure. However, since the contaminant is generated outside the hood, it must be designed and used properly in order to be as effective as a partial enclosure. The most effective control is a complete enclosure.

To work effectively, the air inlet of an exterior hood must be of appropriate geometrical design and placed near the point of chemical release. The distance away will depend on the size and shape of the hood and the velocity of air needed at the generation source to capture the contaminant and bring it into the hood. Generally, the closer to the generation source, the better. Design face or slot velocities are typically in the range of 0.25 to 1.0 and 5.0 to 10.0 m/s, respectively. Many design guidelines exist for this class of exhaust hoods in Chapter 3 of the ACGIH manual (ACGIH 1992) or in Burgess, Ellenbecker and Treitman (1989). Two types of exterior hoods that find frequent application are “canopy” hoods and “slot” hoods.

Canopy hoods are used primarily for capture of gases, vapours and aerosols released in one direction with a velocity that can be used to aid capture. These are sometimes called “receiving” hoods. This type of hood is generally used when the process to be controlled is at elevated temperatures, to make use of the thermal updraft, or the emissions are directed upward by the process. Examples of operations that may be controlled in this manner include drying ovens, melting furnaces and autoclaves. Many equipment manufacturers recommend specific capture hood configurations that are suitable for their units. They should be consulted for advice. Design guidelines are also provided in the ACGIH manual, Chapter 3 (ACGIH 1992). For example, for an autoclave or oven where the distance between the hood and the hot source does not exceed approximately the diameter of the source or 1 m, whichever is smaller, the hood may be considered a low canopy hood. Under such conditions, the diameter or cross-section of the hot air column will be approximately the same as the source. The diameter or side dimensions of the hood therefore need only be 0.3 m larger than the source.

The total flow rate for a circular low canopy hood is

Dt =       difference between temperature of the hood source, and the ambient, °F.

Similar relationships exist for rectangular hoods and high canopy hoods. An example of a canopy hood can be seen in figure 5. 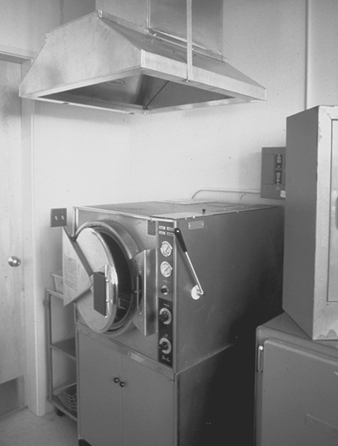 Slot hoods are used for control of operations that cannot be performed inside a containment hood or under a canopy hood. Typical operations include barrel filling, electroplating, welding and degreasing. Examples are shown in figure 6 and figure 7. 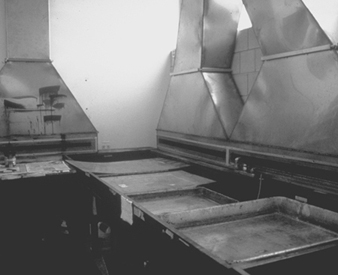 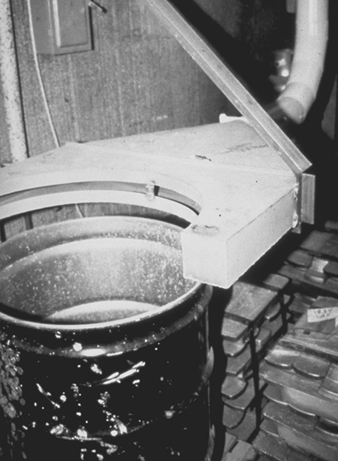 The required flow can be calculated from a series of equations determined empirically by the size and shape of the hood and the distance of the hood from the source. For example, for a flanged slot hood, the flow is determined by

The velocity needed at the source is sometimes called “capture velocity” and is usually between 0.25 and 2.5 m/s. Guidelines for selecting an appropriate capture velocity are provided in the ACGIH manual. For areas with excessive cross-drafts or for high-toxicity materials, the upper end of the range should be selected. For particulates, higher capture velocities will be necessary.

Some hoods may be some combination of enclosure, exterior and receiving hoods. For example, the spray paint booth shown in figure 4 is a partial enclosure that is also a receiving hood. It is designed to provide efficient capture of particles generated by making use of the particle momentum created by the rotating grinding wheel in the direction of the hood.

Care must be used in selecting and designing local exhaust systems. Considerations should include (1) ability to enclose the operation, (2) source characteristics (i.e., point source vs. widespread source) and how the contaminant is generated, (3) capacity of existing ventilation systems, (4) space requirements and (5) toxicity and flammability of contaminants.

Once the hood is installed, a routine monitoring and maintenance programme for the systems shall be implemented to assure its effectiveness in preventing exposure to workers (OSHA 1993). Monitoring of the standard laboratory chemical hood has become standardized since the 1970s. However, there is no such standardized procedure for other forms of local exhaust; therefore, the user must devise his or her own procedure. The most effective would be a continuous flow monitor. This could be as simple as a magnetic or water pressure gauge measuring static pressure at the hood (ANSI/AIHA 1993). The required hood static pressure (cm of water) will be known from the design calculations, and flow measurements can be made at the time of installation to verify them. Whether or not a continuous flow monitor is present, there should be some periodic evaluation of the hood performance. This can be done with smoke at the hood to visualize capture and by measuring total flow in the system and comparing that to the design flow. For enclosures it is usually advantageous to measure face velocity through the openings.

Personnel must also be instructed in the correct use of these types of hoods, particularly where the distance from the source and the hood can be easily changed by the user.

If local exhaust systems are designed, installed and used correctly they can be an effective and economical means of controlling toxic exposures.

More in this category: « Laboratory Hygiene The GESTIS Chemical Information System: A Case Study »
back to top

International Labour Organization (ILO). 1993. Safety in the Use of Chemicals at Work. An ILO Code of Practice. Geneva: ILO.