Twelve millennia ago, humankind moved into the Neolithic era and discovered that food, feed and fibre could be produced from the cultivation of plants. This discovery has led to the food and fibre supply that feeds and clothes more than 5 billion people today.

This general profile of the agricultural industry includes its evolution and structure, economic importance of different crop commodities and characteristics of the industry and workforce. Agricultural workforce systems involve three types of major activities:

The agriculture system is shown as four major processes. These processes represent sequential phases in crop production. The agricultural system produces food, feed and fibre as well as consequences for occupational health and, more generally, public health and the environment.

Major commodities, such as wheat or sugar, are outputs from agriculture that are used as food, animal feed or fibre. They are represented in this chapter by a series of articles that address processes, occupational hazards and preventive actions specific to each commodity sector. Animal feed and forage are discussed in the chapter Livestock rearing.

Evolution and Structure of the Industry

The Neolithic revolution—the change from hunting and gathering to farming—started in three different places in the world. One was west and southwest of the Caspian Sea, another was in Central America and a third was in Thailand near the Burmese border. Agriculture started in about 9750 BC at the latter location, where seeds of peas, beans, cucumbers and water chestnuts have been found. This was 2,000 years before true agriculture was discovered in the other two regions. The essence of the Neolithic revolution and, thus, agriculture is the harvesting of plant seeds, their reintroduction into the soil and cultivation for another harvest.

In the lower Caspian area, wheat was the early crop of choice. As farmers migrated, taking wheat seed with them, the weeds in other regions were discovered to also be edible. These included rye and oats. In Central America, where maize and beans were the staples, the tomato weed was found to bear nutritious food.

Agriculture brought with it several problems:

Solutions to these problems have led to new industries. Ways to control weeds, insects and rodents evolved into the pesticide industry, and the need to replenish the soil has resulted in the fertilizer industry. The need to provide water for irrigation has spawned systems of reservoirs and networks of pipes, canals and ditches.

Agriculture in the developing nations consists principally of family-owned plots. Many of these plots have been handed down from generation to generation. Peasants make up half of the world’s rural poor, but they produce four-fifths of the developing countries’ food supply. In contrast, farms are increasing in size in the developed countries, turning agriculture into large-scale commercial operations, where production is integrated with processing, marketing and distribution in an agribusiness system (Loftas 1995).

Agriculture has provided subsistence for farmers and their families for centuries, and it has recently changed into a system of production agriculture. A series of “revolutions” has contributed to an increase in agricultural production. The first of these was the mechanization of agriculture, whereby machines in the fields substituted for manual labour. The second was the chemical revolution that, after the Second World War, contributed to the control of pests in agriculture, but with environmental consequences. A third was the green revolution, which contributed to North American and Asian productivity growth through genetic advances in the new varieties of crops.

The human population has grown from 2.5 billion in 1950 to 5.6 billion in 1994, and the United Nations estimates that it will continue to grow to 7.9 billion by 2025. The continued rise in the human population will increase the demand for food energy and nutrients, both because of the increase in numbers of people and the global drive to combat malnutrition (Brown, Lenssen and Kane 1995). A list of nutrients derived from food is shown in table 1.

Agriculture today can be understood as an enterprise to provide subsistence for those doing the work, staples for the community in which the food is grown and income from the sale of commodities to an external market. A staple food is one that supplies a major part of energy and nutrient needs and constitutes a dominant part of the diet. Excluding animal products, most people live off of one or two of the following staples: rice, wheat, maize (corn), millet, sorghum, and roots and tubers (potatoes, cassava, yams and taro). Although there are 50,000 edible plant species in the world, only 15 provide 90% of the world’s food energy intake.

Cereals constitute the principal commodity category that the world depends upon for its staples. Cereals include wheat and rice, the principal food staples, and coarse grains, which are used for animal feed. Three—rice, maize and wheat—are staples to more than 4.0 billion people. Rice feeds about half of the world’s population (Loftas 1995).

Another basic food crop is the starchy foods: cassava, sweet potatoes, potatoes, yams, taro and plantains. More than 1 billion people in developing nations use roots and tubers as staples. Cassava is grown as a staple in developing countries for 500 million people. For some of these commodities, much of the production and consumption remains at the subsistence level.

An additional basic food crop is the pulses, which comprise a number of dry beans—peas, chickpeas and lentils; all are legumes. They are important for their starch and protein.

Small landholders grow many of the same crops as plantation operations do. Plantation crops, typically thought of as tropical export commodities, include natural rubber, palm oil, cane sugar, tropical beverages (coffee, cocoa, tea), cotton, tobacco and bananas. They may include crops that are also grown for both local consumption and export, such as coffee and sugar cane (ILO 1994).

Urban agriculture is labour intensive, occurs on small plots and is present in developed as well as developing countries. In the United States, more than one-third of the dollar value of agricultural crops is produced in urban areas and agriculture may employ as much as 10% of the urban population. In contrast, up to 80% of the population in smaller Siberian and Asian cities may be employed in agricultural production and processing. An urban farmer’s produce may also be used for barter, such as paying a landlord (UNDP 1996).

Characteristics of the Industry and Workforce

The 1994 world population totalled 5,623,500,000, and 2,735,021,000 (49%) of this population was engaged in agriculture, as shown in figure 1 . The largest component of this workforce is in the developing nations and transitional economies. Less than 100 million are in the developed nations, where mechanization has added to their productivity.

Figure 1. Millions of people engaged in agriculture by world region (1994) 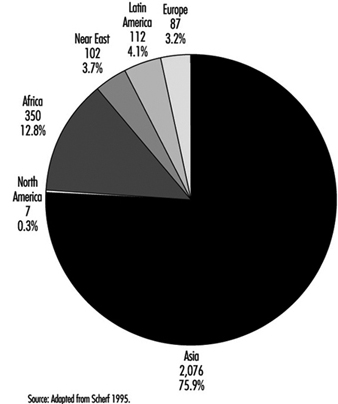 Farming employs men and women, young and old. Their roles vary; for example, women in sub-Saharan Africa produce and market 90% of locally grown food. Women are also given the task of growing the subsistence diet for their families (Loftas 1995).

Children become farm labourers around the world at an early age (figure 2 ), working typically 45 hours per week during harvesting operations. Child labour has been a part of plantation agriculture throughout its history, and a prevalent use of contract labour based upon compensation for tasks completed aggravates the problem of child labour. Whole families work to increase the task completion in order to sustain or increase their income. 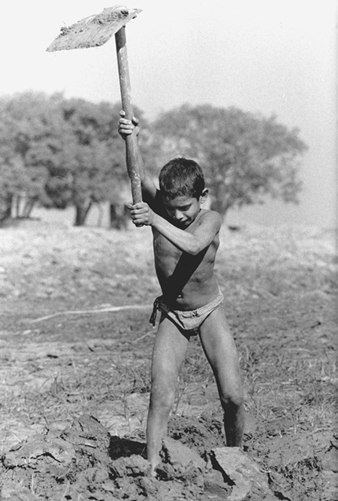 Data on plantation employment generally show that the highest incidence of poverty is among agricultural wage labourers working in commercial agriculture. Plantations are located in tropical and subtropical regions of the world, and living and working conditions there may aggravate health problems that accompany the poverty (ILO 1994).

Total agricultural employment by major world region is shown in figure 1. In both the United States and Canada, a small proportion of the population is employed in agriculture, and farms are becoming fewer as operations consolidate. In Western Europe, agriculture has been characterized by smallholdings, a relic of equal division of the previous holding among the children. However, with the migration from agriculture, holdings in Europe have been increasing in size. Eastern Europe’s agriculture carries a history of socialized farming. The average farm size in the former USSR was more than 10,000 hectares, while in other Eastern European countries it was about one-third that size. This is changing as these countries move toward market economies. Many Asian countries have been modernizing their agricultural operations, with some countries achieving rice surpluses. More than 2 billion people remain engaged in agriculture in this region, and much of the increased production is attributed to high- production species of crops such as rice. Latin America is a diverse region where agriculture plays an important economic role. It has vast resources for agricultural use, which has been increasing, but at the expense of tropical forests. In both the Middle East and Africa, per capita food production has seen a decline. In the Middle East, the principal limiting factor on agriculture is the availability of water. In Africa, traditional farming depends upon small, 3- to 5-hectare plots, which are operated by women while the men are employed elsewhere, some in other countries to earn cash. Some countries are developing larger farming operations.

Read 3203 times Last modified on Saturday, 30 July 2022 23:25
Tweet
Published in 64. Agriculture and Natural Resources Based Industries
More in this category: Coffee Cultivation »
back to top