Coffee as a beverage was introduced in Europe during the sixteenth century, first in Germany and then throughout the European continent during the following century, especially to France and Holland. Afterwards, it spread to the rest of the world.

Since coffee will not keep its characteristic smell and flavour for long, after roasting and grinding, industrial establishments to roast and grind coffee have become needed wherever coffee is consumed. The establishments are usually small or medium-sized plants, but large factories do exist, mainly to produce regular as well as instant (soluble) coffee.

It is difficult to estimate the number of workers employed by the coffee industry. Some of the smaller plants do not keep registries, and figures are not entirely reliable. Considering a total consumption of approximately 100 million 60 kg bags of coffee during the year 1995, the worldwide coffee trade represents about US$50 million. Table 1 lists selected coffee-importing countries, giving an idea of the present world consumption.

Coffee manufacturing is a relatively simple process, including cleaning, roasting, grinding and packing processes, as shown in figure 1. However, modern technology has led to complex processes, with an increase in speed of production and requiring laboratories for quality-control testing of the product. 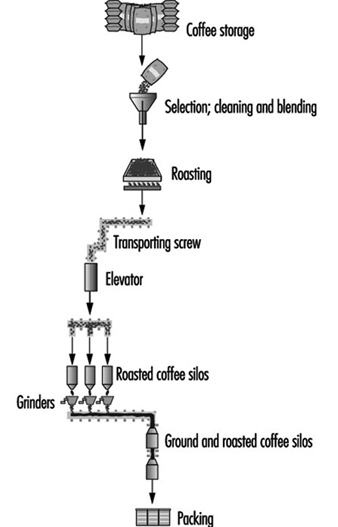 Coffee beans arrive at factories in 60 kg bags, which are unloaded mechanically or manually. In the latter case, usually two workers hold a bag and place it upon another worker’s head. This worker will carry the bag to be stored. Even when transportation is done on coveyor belts, some physical effort with high energy consumption is required.

The use of instant coffee has steadily increased, reaching approximately 20% of the world consumption. Instant coffee is obtained through a complex process in which blasts of hot air blow over coffee extracts, followed by evaporation, cooling and lyophilization (freeze drying), varying in details from one factory to another. In the manufacture of decaffeinated coffee, which represents over 10% of the consumption in the United States and in Europe, some plants still utilize chlorinated solvents (such as methylene chloride), which is removed by a blast of water vapour.

To start coffee processing, bags are opened with a small knife, and the beans are thrown inside a bin to be cleaned. The work area is noisy and a large amount of residual particulate material remains in suspension, released from the cleaning machine.

Roasting exposes workers to risks of burns and thermal discomfort. Bean mixing, or blending, is done automatically, as is grinding, in areas which may be deficient in lighting due to interference from suspended coffee dust. Dirt may accumulate, noise levels may be high and mechanization requires work at a high speed.

After grinding, bags of different materials and sizes are filled and then packed, usually in cardboard boxes. When performed manually, these operations require high-speed repetitive motion of hands and arms. Cardboard boxes are transported to storage areas and then to their final destination.

The strong odour characteristic of the coffee industry may bother workers inside the plants, and the surrounding community as well. The significance of this problem as a potential health risk has not yet been clarified. The odour of coffee is due to a mixture of different products; research is ongoing to identify individual effects of these chemicals. Some components of the coffee dust and some of the odour-producing substances are known to be allergens.

Potential risks in instant-coffee plants are similar to those in regular coffee production; in addition, there are risks due to hot steam and boiler explosions. In the removal of caffeine, even when performed automatically, the risk of solvent exposure may be present.

Other potential risks which may affect workers’ health are similar to those found in food industries in general. Risks for accidents arise from cuts from knives used in bag opening, burns during roasting and crushing during grinding operations, especially in old machinery without automatic machine guarding. There are fire and explosion hazards from the large amounts of dust, unsafe electric wiring and gas used for heating the roasters.

Several hazards may be found in the coffee industry including, among others: hearing loss due to excessive noise, thermal stress during roasting, poisoning from pesticides and musculoskeletal disorders, especially affecting the backs of workers who lift and carry heavy bags.

Allergic disorders affecting the eye, skin or respiratory system may occur in any area in a coffee plant. It is the coffee dust which is associated with bronchitis with lung function impairment; rhinitis and conjunctivitis are also concerns (Sekimpi et al. 1996). Allergic reactions to contaminants of bags previously used for other materials, such as castor bean seeds, have also occurred (Romano et al. 1995).

Repetitive-motion disorders may result from high-speed motion in packing operations, especially where workers are not warned of the risk.

In less developed countries, effects of occupational risks may develop early because conditions of work may be inadequate and, moreover, other social and public health factors may contribute to disease. Such factors include: low salaries, inadequate medical care and social security, improper housing and sanitation, low levels of education, illiteracy, endemic diseases and malnutrition.

Machine guarding, general ventilation and local exhaust systems, noise abatement, housekeeping and cleaning, decreased bag weights, substitutes of solvents used in caffeine extraction, periodic inspection and preventive maintenance of boilers are examples of preventive measures that are required for ensuring adequate levels of industrial hygiene and safety. Odour intensity may be reduced through modification of roasting procedures. The organization of work can be modified so that repetitive-motion disorders may be avoided through alteration of working position and rhythm, as well as the introduction of systematic breaks and regular exercises, among other practices.

Periodic health screening should stress evaluation of exposure to herbicides and pesticides, spinal disorders and early signs of repetitive-motion disorders. Scratch tests using extracts from coffee beans, even if not universally accepted as completely reliable, may be useful in the identification of hypersusceptible individuals. Lung function tests may aid in the early diagnosis of obstructive respiratory conditions.

Health education is an important instrument to enable workers to identify health risks and their consequences and to become aware of their right to a healthy working environment.

Governmental action is required, through legislation and enforcement; employers’ participation is needed in providing and maintaining adequate working conditions.

More in this category: « Soft Drink Bottling and Canning Tea Industry »
back to top

Giullemin, MP and B Horisberger. 1994. Fatal intoxication due to an unexpected presence of carbon dioxide. Ann Occ Hyg 38: 951-957.