Forming metal parts by application of high compressive and tensile forces is common throughout industrial manufacturing. In stamping operations, metal, most often in the form of sheets, strips or coils, is formed into specific shapes at ambient temperatures by shearing, pressing and stretching between dies, usually in a series of one or more discrete impact steps. Cold-rolled steel is the starting material in many stamping operations creating sheet metal parts in the automotive and appliance and other industries. Approximately 15% of workers in the automotive industry work in stamping operations or plants.

In forging, compressive force is applied to pre-formed blocks (blanks) of metal, usually heated to high temperatures, also in one or more discrete pressing steps. The shape of the final piece is determined by the shape of the cavities in the metal die or dies used. With open impression dies, as in drop hammer forging, the blank is compressed between one die attached to the bottom anvil and the vertical ram. With closed impression dies, as in press forging, the blank is compressed between the bottom die and an upper die attached to the ram.

Drop hammer forges use a steam or air cylinder to raise the hammer, which is then dropped by gravity or is driven by steam or air. The number and force of the hammer blows are manually controlled by the operator. The operator often holds the cold end of the stock while operating the drop hammer. Drop hammer forging once comprised about two-thirds of all forging done in the United States, but is less common today.

Press forges use a mechanical or hydraulic ram to shape the piece with a single, slow, controlled stroke (see figure 1). Press forging is usually controlled automatically. It can be done hot or at normal temperatures (cold-forging, extruding). A variation on normal forging is rolling, where continuous applications of force are used and the operator turns the part. 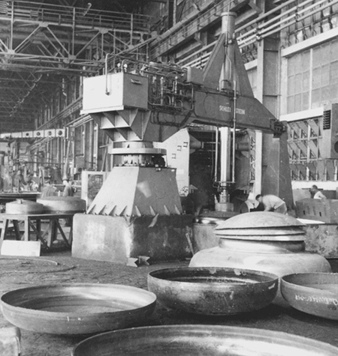 Die lubricants are sprayed or otherwise applied to die faces and blank surfaces before and between hammer or press strokes.

High-strength machine parts such as shafts, ring gears, bolts and vehicle suspension components are common steel forging products. High-strength aircraft components such as wing spars, turbine disks and landing gear are forged from aluminium, titanium or nickel and steel alloys. Approximately 3% of automotive workers are in forging operations or plants.

Many hazards common in heavy industry are present in stamping and forging operations. These include repetitive strain injuries (RSIs) from repeated handling and processing of parts and operation of machine controls such as palm buttons. Heavy parts place workers at risk for back and shoulder problems as well as upper extremity musculoskeletal disorders. Press operators in automotive stamping plants have rates of RSIs that are comparable to those of assembly plant workers in high-risk jobs. High-impulse vibration and noise are present in most stamping and some forging (e.g., steam or air hammer) operations, causing hearing loss and possible cardiovascular illness; these are among the highest-noise industrial environments (over 100 dBA). As in other forms of automation-driven systems, worker energy loads can be high, depending on the parts handled and machine cycling rates.

Catastrophic injuries resulting from unanticipated machine movements are common in stamping and forging. These can be due to: (1) mechanical failure of machine control systems, such as clutch mechanisms in situations where workers are routinely expected to be within the machine operating envelope (an unacceptable process design); (2) deficiencies in machine design or performance that invite unprogrammed worker interventions such as moving jammed or misaligned parts; or (3) improper, high-risk maintenance procedures performed without adequate lockout of the entire machine network involved, including parts transfer automation and the functions of other connected machines. Most automated machine networks are not configured for quick, efficient and effective lockout or safe trouble-shooting.

Stamping operations have high risk of severe laceration due to the required handling of parts with sharp edges. Possibly worse is the handling of the scrap resulting from cut-off perimeters and punched out sections of parts. Scrap is typically collected by gravity-fed chutes and conveyors. Clearing occasional jams is a high-risk activity.

Chemical hazards specific to stamping typically arise from two main sources: drawing compounds (i.e., die lubricants) in actual press operations and welding emissions from assembly of the stamped parts. Drawing compounds (DCs) are required for most stamping. The material is sprayed or rolled onto sheet metal and further mists are generated by the stamping event itself. Like other metalworking fluids, drawing compounds may be straight oils or oil emulsions (soluble oils). Components include petroleum oil fractions, special lubricity agents (e.g., animal and vegetable fatty acid derivatives, chlorinated oils and waxes), alkanolamines, petroleum sulphonates, borates, cellulose-derived thickeners, corrosion inhibitors and biocides. Air concentrations of mist in stamping operations may reach those of typical machining operations, although these levels tend to be lower on average (0.05 to 2.0 mg/m3). However, visible fog and accumulated oil film on building surfaces are often present, and skin contact may be higher due to extensive handling of parts. Exposures most likely to present hazards are chlorinated oils (possible cancer, liver disease, skin disorders), rosin or tall oil fatty acid derivatives (sensitizers), petroleum fractions (digestive cancers) and, possibly, formaldehyde (from biocides) and nitrosamines (from alkanolamines and sodium nitrite, either as DC ingredients or in surface coatings on incoming steel). Elevated digestive cancer has been observed in two automotive stamping plants. Microbiological blooms in systems that apply DCs by rolling it onto sheet metal from an open reservoir can pose risks to workers for respiratory and dermatological problems analogous to those in machining operations.

Welding of stamped parts is often performed in stamping plants, usually without intermediate washing. This produces emissions that include metal fumes and pyrolysis and combustion products from drawing compound and other surface residues. Typical (primarily resistance) welding operations in stamping plants generate total particulate air concentrations in the range 0.05 to 4.0 mg/m3. Metal content (as fumes and oxides) usually makes up less than half of that particulate matter, indicating that up to 2.0 mg/m3 is poorly characterized chemical debris. The result is haze visible in many stamping plant welding areas. The presence of chlorinated derivatives and other organic ingredients raises serious concerns over the composition of welding smoke in these settings and strongly argues for ventilation controls. Application of other materials prior to welding (such as primer, paint and epoxy-like adhesives), some of which are then welded over, adds further concern. Welding production repair activities, usually done manually, often pose higher exposures to these same air contaminants. Excess rates of lung cancer have been observed among welders in an automotive stamping plant.

Like stamping, forging operations can pose high laceration risks when workers handle forged parts or trim the flash or unwanted edges off parts. High impact forging can also eject fragments, scale or tools, causing injury. In some forging activities, the worker grasps the working piece with tongs during the pressing or impact steps, increasing the risk for musculoskeletal injuries. In forging, unlike stamping, furnaces for heating parts (for forging and annealing) as well as bins of hot forgings are usually nearby. These create potential for high heat stress conditions. Additional factors in heat stress are the worker’s metabolic load during manual handling of materials and, in some cases, heat from combustion products of oil-based die lubricants.

Die lubrication is required in most forging and has the added feature that the lubricant comes in contact with high-temperature parts. This causes immediate pyrolysis and aerosolization not only in the dies but also subsequently from smoking parts in cooling bins. Forging die lubricant ingredients can include graphite slurries, polymeric thickeners, sulphonate emulsifiers, petroleum fractions, sodium nitrate, sodium nitrite, sodium carbonate, sodium silicate, silicone oils and biocides. These are applied as sprays or, in some applications, by swab. Furnaces used for heating metal to be forged are usually fired by oil or gas, or they are induction furnaces. Emissions can result from fuel-fired furnaces with inadequate draft and from non-ventilated induction furnaces when incoming metal stock has surface contaminants, such as oil or corrosion inhibitors, or if, prior to forging, it was lubricated for shearing or sawing (as in the case of bar stock). In the US, total particulate air concentrations in forging operations typically range from 0.1 to 5.0 mg/m3 and vary widely within forging operations due to thermal convection currents. An elevated lung cancer rate was observed among forging and heat treatment workers from two ball-bearing manufacturing plants.

Few studies have evaluated actual health effects in workers with stamping or forging exposures. Comprehensive characterization of the toxicity potential of most routine operations, including identification and measurement of priority toxic agents, has not been done. Evaluating the long-term health effects of die lubrication technology developed in the 1960s and 1970s has only recently become feasible. As a result, regulation of these exposures defaults to generic dust or total particulate standards such as 5.0 mg/m3 in the US. While probably adequate in some circumstances, this standard is not demonstrably adequate for many stamping and forging applications.

Some reduction in die lubricant mist concentrations is possible with careful management of the application procedure in both stamping and forging. Roll application in stamping is preferred when feasible, and using minimal air pressure in sprays is beneficial. Possible elimination of priority hazardous ingredients should be investigated. Enclosures with negative pressure and mist collectors can be highly effective but may be incompatible with parts handling. Filtering air released from high-pressure air systems in presses would reduce press oil mist (and noise). Skin contact in stamping operations can be reduced with automation and good personal protective wear, providing protection against both laceration and liquid saturation. For stamping plant welding, washing parts prior to welding is highly desirable, and partial enclosures with LEV would reduce smoke levels substantially.

Controls to reduce heat stress in stamping and hot forging include minimizing the amount of manual material handling in high-heat areas, shielding of furnaces to reduce radiation of heat, minimizing the height of furnace doors and slots and using cooling fans. The location of cooling fans should be an integral part of the design of air movement to control mist exposures and heat stress; otherwise, cooling may be obtained only at the expense of higher exposures.

Mechanization of material handling, switching from hammer to press forging when possible and adjusting the work rate to ergonomically practical levels can reduce the number of musculoskeletal injuries.

Noise levels can be reduced through a combination of switching from hammer to press forges when possible, well-designed enclosures and quieting of furnace blowers, air clutches, air leads and parts handling. A hearing conservation programme should be instituted.

PPE needed includes head protection, foot protection, goggles, hearing protectors (around are as with excessive noise), heat- and oil-proof aprons and leggings (with heavy use of oil-based die lubricants) and infrared eye and face protection (around furnaces).

The environmental hazards arising from stamping plants, relatively minor compared to those from some other types of plants, include disposal of waste drawing compound and washing solutions and the exhausting of welding smoke without adequate cleaning. Some forging plants historically have caused acute degradation of local air quality with forging smoke and scale dust. However, with appropriate air cleaning capacity, this need not occur. Disposition of stamping scrap and forging scale containing die lubricants is another potential issue.

More in this category: « Foundries Welding and Thermal Cutting »
back to top

International Association for Research on Cancer (IARC). 1984. Monographs on the Evaluation of Carcinogenic Risks to Humans. Vol. 34. Lyon: IARC.

Palheta, D and A Taylor. 1995. Mercury in environmental and biological samples from a gold mining area in the Amazon Region of Brazil. Science of the Total Environment 168:63-69.