Transport category aircraft are used for transporting passengers and freight in the commercial airline/airfreight industry. Both the manufacturing and maintenance process involve operations that remove, fabricate, alter and/or install components all over the aircraft itself. These aircraft vary in size but some (e.g., Boeing 747, Airbus A340) are among the largest aircraft in the world. Due to the size of the aircraft, certain operations require personnel to work while elevated above the floor or ground surface.

There are many potential fall situations within both aircraft manufacturing and maintenance operations throughout the air transport industry. While each situation is unique and may require a different solution for protection, the preferred method of fall protection is by preventing falls through an aggressive plan for hazard identification and control.

Effective fall protection involves an institutional commitment addressing every aspect of hazard identification and control. Each operator must continually evaluate its operation for specific fall exposures and develop a protection plan comprehensive enough to address each exposure throughout their operation.

Any time an individual is elevated they have the potential to fall to a lower level. Falls from elevations often result in serious injuries or fatalities. For this reason, regulations, standards and policies have been developed to assist companies in addressing the fall hazards throughout their operations.

A fall hazard exposure consists of any situation in which an individual is working from an elevated surface where that surface is several feet above the next level down. Assessing the operation for these exposures involves identifying all areas or tasks where it is possible that individuals are exposed to elevated work surfaces. A good source of information is injury and illness records (labour statistics, insurance logs, safety records, medical records and so on); however, it is important to look further than historical events. Each work area or process must be evaluated to determine whether there are any instances where the process or task requires the individual to work from a surface or area that is elevated several feet above the next lower surface.

Virtually any manufacturing or maintenance task performed on one of these aircraft has the potential to expose personnel to fall hazards because of the size of the aircraft. These aircraft are so large that virtually every area of the entire aircraft is several feet above ground level. Although this provides many specific situations where personnel could be exposed to fall hazards, all the situations may be categorized as either work from platforms or work from aircraft surfaces. The division between these two categories originates with the factors involved in addressing the exposures themselves.

The work-from-platforms category involves personnel using a platform or stand to access the aircraft. It includes any work performed from a non-aircraft surface that is specifically used to access the aircraft. Tasks performed from aircraft docking systems, wing platforms, engine stands, lift trucks and so on would all be in this category. Potential fall exposures from surfaces in this category may be addressed with traditional fall-protection systems or a variety of guidelines that are currently in existence.

The work from aircraft surfaces category involves personnel using the aircraft surface itself as the platform for access. It includes any work performed from an actual aircraft surface such as wings, horizontal stabilizers, fuselages, engines and engine pylons. Potential fall exposures from surfaces in this category are very diverse depending on the specific maintenance task and sometimes require non-conventional approaches for protection.

The reason for the distinction between these two categories becomes clear when attempting to implement protective measures. Protective measures are those steps that are taken to eliminate or control each fall exposure. The methods for controlling fall hazards may be engineering controls, personal protective equipment (PPE) or procedural controls.

Engineering controls are the most common measure employed for platforms in both manufacturing and maintenance. They usually consist of standard railings; however, any barrier on all open sides of a platform effectively protects personnel from the fall exposure. If the platform were positioned right next to the aircraft, as is common, the side next to the aircraft would not need rails, as protection is provided by the aircraft itself. The exposures to be managed are then limited to gaps between the platform and the aircraft.

An alternative to railings for engineering controls involves netting positioned around the platform or aircraft surface to catch individuals when they fall. These are effective in stopping someone’s fall but are not preferred, as individuals may be injured during the impact with the net itself. These systems also require a formal procedure for rescue/retrieval of personnel once they have fallen into the nets. 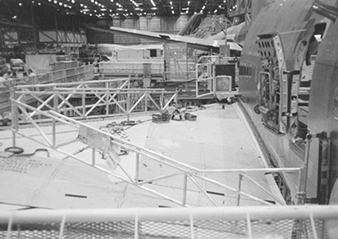 PPE for falls consists of a full body harness with a lanyard attached to either a lifeline or other suitable anchorage. These systems are typically used for fall arrest; however, they may also be used in a fall restraint system.

Used in a personal fall arrest system (PFAS), PPE may be an effective means for preventing an individual from impacting the next lower level during a fall. To be effective, the anticipated fall distance must not exceed the distance to the lower level. It is important to note that with such a system the individual may still experience injuries as a result of the fall arrest itself. These systems also require a formal procedure for rescue/retrieval of personnel once they have fallen and been arrested.

PFASs are used with work from platforms most often when engineering controls are not functional—usually due to restriction of the work process. They are also used with work from aircraft surfaces because of the logistical difficulties associated with engineering controls. The most challenging aspects of PFASs and aircraft surface work are the fall distance with respect to personnel mobility and the added weight to the aircraft structure to support the system. The weight issue may be eliminated by designing the system to attach to the facility around the aircraft surface, rather than the aircraft structure; however, this also limits fall protection capability to that one facility location. Figure 2 shows a portable gantry used for providing a PFAS. PFASs are used more extensively in maintenance operations than manufacturing, but are used during certain manufacturing situations. 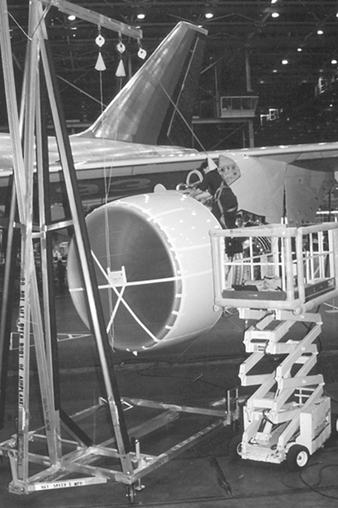 A fall restraint system (FRS) is a system designed so that the individual is prevented from falling over the edge. FRSs are very similar to PFASs in that all the components are the same; however, the FRSs restrict the individual’s range of movement such that the individual cannot reach close enough to the edge of the surface to fall over. FRSs are the preferred evolution of PPE systems for both manufacturing and maintenance operations, because they prevent any fall-related injury and they eliminate the need for a rescue process. They are not extensively used in either work from platforms or aircraft surfaces, because of the challenges of designing the system so that personnel have the mobility needed to perform the work process, but are restricted from reaching the edge of the surface. These systems decrease the weight/efficiency issue with work from aircraft surfaces, because FRSs do not require the strength that a PFAS requires. At the time of printing, only one aircraft type (the Boeing 747) had an airframe-based FRS available. See figure 3 and figure 4. 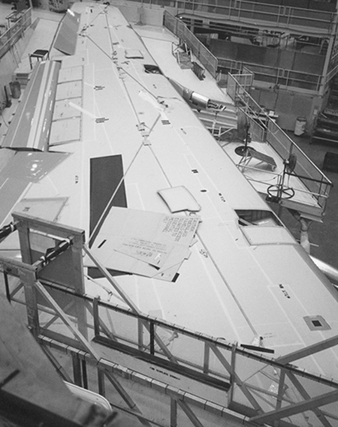 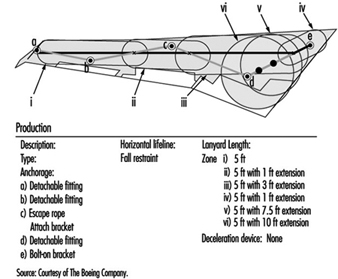 A horizontal lifeline attaches to permanent fittings on the wing surface, creating six fall protection zones. Employees connect a 1.5 m lanyard to D-rings or strap extensions that slide along the horizontal lifeline in zones i through iv, and are fixed in zones v and vi. The system allows access only to the edge of the wing, preventing the possibility of falling from the wing surface.

Procedural controls are used when both engineering controls and PPE are either ineffective or impractical. This is the least preferred method of protection, but is effective if managed properly. Procedural controls consist of designating the work surface as a restricted area for only those individuals that are required to enter during that specific maintenance process. Fall protection is achieved through very aggressive written procedures covering hazard exposure identification, communication and individual actions. These procedures mitigate the exposure as best as possible under the circumstances of the situation. They must be site specific and must address the specific hazards of that situation. These are very seldom used for work from platforms in either manufacturing or maintenance, but they are used for maintenance work from aircraft surfaces.

Dunphy, BE and WS George. 1983. Aircraft and aerospace industry. In Encyclopaedia of Occupational Health and Safety, 3rd edition. Geneva: ILO.