The development of stationary planing machines can be traced back to the beginning of the 19th century. On the first machines of this type, the workpiece was clamped to a carriage and fed below a horizontal shaft fitted with blades extending over the full working width. In 1850 a planing machine was built in Germany on which the workpiece was fed over a cutterblock located between two tables used to position and to support the workpiece. Apart from technical improvements this basic design has been maintained to this day. Such a machine is called a surface planing machine or a jointer (see figure 1). 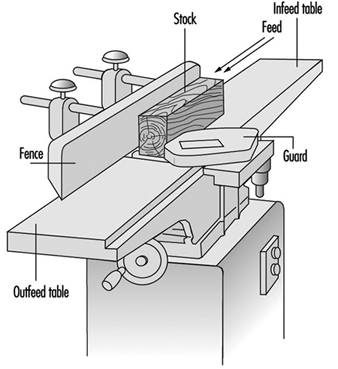 More recently, machines were designed to plane the upper surface of a workpiece to a predetermined thickness by means of a horizontally rotating cutterblock. The distance between the cutting circle diameter and the surface of the table supporting the workpiece is adjustable. Such machines are called one-side-thickness planing machines.

These two basic machine types were eventually combined into a machine which could be used for both surface and thickness planing. This development ended in planing machines for two-, three- and four-sided working in one pass.

From the point of view of occupational safety and health, it is strongly recommended that measures be taken for the extraction of wood dust and chips from the planing machine (e.g., by connecting the planing machine to a dust extraction system). Dust originating from hardwood (oak, beech) and tropical wood is considered a particular health hazard and must be extracted. Measures to reduce the noise level of planing machines should also be taken. An automatic brake for the cutterblock is compulsory in many countries.

A surface planing machine has rigid main frame that supports the infeed and the outfeed table. The cutterblock is located between the two tables and mounted on ball bearings. The main frame should be ergonomically designed (i.e., it should enable the operator to work comfortably).

Hand-operated control devices should be installed in such a way that the operator is not placed in a hazardous situation when operating them, and the possibility of inadvertent operation should be minimized.

The major operations on a surface planing machine are flatting and edging. The position of the hands on the workpiece is important from an operational and safety viewpoint. When flatting, the workpiece should be fed with one hand, with the other hand holding it down initially on the infeed table. As soon as there is a sufficient portion of timber on the outfeed table, the latter hand can pass safely over the bridge-guard to apply pressure on the outfeed table and will be followed by the feeding hand to complete the feeding operation. When edging, the hands should not pass over the cutterblock while in contact with the timber. Their prime function is to exert horizontal pressure on the workpiece to maintain it square to the fence.

The noise produced by the rotating cutterblock often may exceed the level considered harmful to the ear. Measures to reduce the noise level are therefore necessary. Some of the noise reduction measures which have proved successful on surface planers are the following:

Noise reduction up to 12 dBA when idling and 10 dBA under load can be achieved.

Cutterblocks should have a circular cross-section, and the chip clearance grooves and slots should be as small as possible. The blades and inserts shall be properly secured, preferably by form lock fixing.

Equipping surface planing machines with an automatic brake for the cutterblock is recommended. The brake should be activated when the machine is stopped, and the braking time should not exceed 10 seconds. 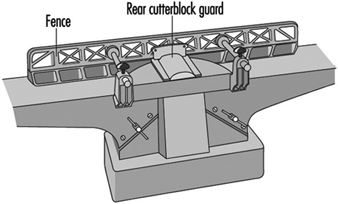 As the cutterblock rotates opposite to the direction in which the workpiece is fed, the hazard of kickback exists. If the workpiece is ejected, the operator’s hand or fingers may come in contact with the rotating cutterblock unless adequate guarding has been provided. It also frequently happens that the hand comes in contact with the cutterblock while feeding the workpiece with stretched fingers instead of pushing it forward with closed fist. Cutting blades not properly secured may be ejected by centrifugal force and may cause severe injury and/or material damage.

In many countries legislation covering the use of surface planing machines requires that the cutterblock be covered by an adjustable guarding system in order to prevent accidental contact of the operator’s hand with the rotating cutterblock.

In 1938, the SUVA introduced a planer guard which efficiently met all practical requirements. Over the years this guard has proved useful not only as a guarding system but also as an aid for most operations. It is well accepted by the woodworking trade in Switzerland, and almost all industrial surface planing machines are equipped with it. The design features of this guard have been introduced into the draft European standard for surface planing machines. The main features of this guard are the following:

However, accidents still happen. These accidents are mainly caused by failure to adjust the guard properly. Therefore, SUVA engineers have developed a bridge-type guard which covers the cutterblock in front of the fence automatically, and constantly exerts a defined pressure against the workpiece or the fence. This guard has been available since 1992.

The main design features of this new guard, called “Suvamatic”, are the following:

Two idle rollers are arranged in the table. They are designed to facilitate the passage of the workpiece over the table.

The surface of the table must be a plane free from slots or holes. Accidents involving an operator’s fingers being squeezed between openings and the workpiece have occurred. Vertical adjustment of the table may be manual or power assisted. A mechanical end-stop should prevent any contact of the table with the cutterblock or feed rollers. It must be ensured that the vertical adjustment mechanism hold the table in a stable position.

In order to prevent the feeding of oversize workpieces, a device (e.g., a fixed rod or fixed bar) is located on the infeed side of the machine, thereby limiting the maximum workpiece height. A maximum height of 250 mm between the surface of the table in its lowest position and the above-mentioned safety device is rarely exceeded. The usual working width varies between 315 and 800 mm (for special machines this width might go up to 1,300 mm).

To minimize the danger of kickback, one-side thickness planing machines should be fitted with an anti-kickback device covering the full working width of the machine. This anti-kickback device generally consists of several grooved elements arranged on a rod. The individual element is between 8 and 15 mm wide, and it falls under its own weight to the rest position. The lowest point of the individual grooved element in its rest position should be 3 mm below the cutting circle of the cutterblock. The grooved elements should be made of a material (preferably steel) with a resilience strength of 15 J/cm2 and a surface hardness of 100 HB.

The following noise-reduction measures have proved to be successful on one-side thickness planing machines:

Noise reduction of up to 20 dBA may be achieved by a well designed complete enclosure.

The major cause of accidents on one-side thickness planing machines is kickback of the workpiece. Kickback may happen because of:

Typical causes of other accidents are:

The design and operation of combined machines (see figure 3) are similar to those of the individual machines described above. The same can be said in regards to the feed rates, motor power, table and roller adjustments. For thickness planing the surface planing tables are either pulled away, folded down or lifted up sideways, exposing the cutterblock, which is covered by a chip extraction hood to prevent access Combined machines are mainly used in small workshops with few workers, or where space is limited (i.e., in cases where the installation of two individual machines is impossible or unprofitable). 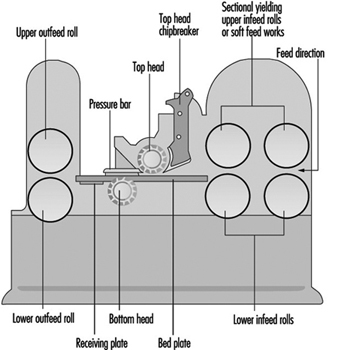 The changeover from one operation to the other is often time-consuming and may be annoying if only a few pieces have to be machined. Moreover, usually only one person at a time can use the machine. However, since 1992 machines have been introduced to the market where simultaneous operation (surface and thickness planing at the same time) is possible.

The hazards of combined machines are to a large extent identical to the hazards listed for the individual machines.

More in this category: « Routing Machines Health Effects and Disease Patterns »
back to top